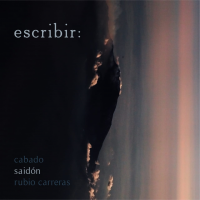 Juan Saidón was born in Buenos Aires in 1995. He is a guitarist, composer and arranger. At the age of 24, he is awarded a scholarship by the Fondo Nacional de las Artes to compose music for the trio he leads since 2017, " escribir: ". He studied guitar with Pepe Luna, Pedro Rossi, Juan Pablo Arredondo and Liliana Ardissone. He studied composition and arrangements with Juan "Pollo" Raffo. He also taught master classes with Diego Schissi, Julian Peralta, Ernesto Jodos, Tony Malaby, among others. As guitarist participates in groups of various styles such as Manto de Carne (jazz- fusion) and Duo Cottet- Saidón (tango and folklore). He has been a music teacher since 2014. Tomás Cabado was born in Buenos Aires in 1993