Edsel Gomez is today one of the premier Latin Jazz pianists in the world. Born in Puerto Rico in 1962, he began piano studies at age five. He grew up in a musical environment that allowed him to master afro-caribbean rhythms in depth, working since childhood with an incredible array of Latin music idols such as Marvin Santiago, Celia Cruz, Carlos “Patato” Valdes, Santitos Colon, Cheo Feliciano, Roberto Roena, Willie Colon, Ismael Rivera Jr., Luis “Perico” Ortiz, Olga Guillot, Lola Flores, Marco Antonio Muñiz, among many others. He gained a Bachelor of Music Degree at Berklee College of Music with a Count Basie Award for outstanding musicianship in 1985 while expanding his performance credits working with such renowned jazz artists as Gary Burton, Claudio Roditi, Bill Pierce, Don Byron, Chick Corea and Jerry Gonzalez among many others. Relocated to Brazil from 1986 to 1996 he studied extensively Brazilian Music and worked accompanying such renown artists as Cauby Peixoto, Wilson Simonal, Paulinho da Viola, Amelinha, Caetano Veloso, Joao Bosco, Lucinha Lins, Angela Maria and Trombonist Raul de Souza, recording de Souza’s “The Other Side of the Moon.” Within the Brazilian landscape he worked as a Pianist, Arranger, Composer, Conductor/Musical Director of Broadway-like shows, educator, and producer and managed his own recording studio/production company 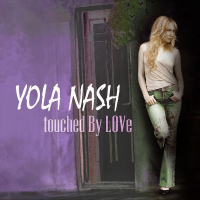 Label: Self Produced
Released: 2020
Track listing: Lies and Wishes; I Miss You Loving Me; Ready for Love; Dance with Me; Forbidden Love; Lololove Me.

GRAMMY® Award News - Yola Nash's new album ​"Touched By Love" is up for a Grammy in two Jazz Vocal categories this year: ​1. Album Of The Year, 2. Best Jazz Vocal Album. She is often described as a European-American treasure for her art, media, and humanitarian achievements. As an internationally accomplished singer, she successfully debuted on the Top 40 AC radio charts in the USA, has performed for Pope John Paul II and made history by becoming the first Polish-American singer to perform and record with the world- renowned, Grammy-winning Jazz at Lincoln Center Orchestra and its music director, legendary, multi-Grammy winning trumpeter Wynton Marsalis

Hardened by growing up in Communist Poland where she was beaten often by an alcoholic father has not dimmed the vibrant spirit of jazz singer-songwriter Yola Nash. Although oppression and obstacles have long been part of her existence, today she thrives in New York City where she hosts her own celeb-driven WABC Radio show and sings ...

Letting his imagination roam free, trumpeter John Bailey envisions a world in which one of his musical touchstones, trumpeter Dizzy Gillespie, is president of the United States--one in which Gillespie's cabinet includes Duke Ellington (secretary of state), Louis Armstrong (secretary of agriculture) and Miles Davis (CIA director). The fact is, Gillespie did “run" for president in ...

The world loves a good “what if..." story, so why not explore the idea of Dizzy Gillespie as president? The famed trumpeter actually ran for the highest office in the land in 1964. And though the move was largely in jest, he didn't shy away from the issues of the day while campaigning. Sadly, many of ...