David Ostwald, AB’77, fell in love with the big brass tuba in sixth grade, when he lived in suburban Philadelphia. He was so enthralled with its sound that when his parents asked what he wanted for his bar mitzvah, he requested one. They said they’d honor his wish, provided he prove his dedication. So Ostwald found a teacher—the tubaist with the Philadelphia Orchestra, who steeped him in the classics. After two years his parents, Lore Ostwald, AM’47, and Martin Ostwald, AM’48, gave him his belated gift—the same instrument he still plays 33 years later. “My tuba has been a magic carpet,” he says one evening at Manhattan’s Birdland Jazz Club, where David Ostwald’s Louis Armstrong Centennial Band has performed Tuesday nights since May 2000

Phoebe Jacobs, who left us on April 9, 2012 just a couple of months shy of 94, was a most remarkable lady who did so much for the music and its makers, as so well-documented in last month's Big Band in the Sky.I first encountered Phoebe when she was handling press and taking care ...

On April 13, Rutgers University-Newark threw a swell party for me on the occasion of my retirement as director of the Institute of Jazz Studies. I won't go into the social and musical details here, but do want to thank all my friends who showed up, and the many others who sent regrets--notably Sonny Rollins, whose ...

[Editor's Note: Interview conducted by Eleanor Brietel, New York Editor of The Drill Press. Most of this interview, originally published on the Buzzle website, was conducted via email.] Eleanor Brietel: You've published fiction and you also write essays on a variety of subjects. I want, however, to confine this discussion to your ... 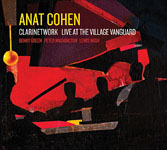 Anat Cohen Clarinetwork Live At The Village Vanguard Anzic Records 2010 For a jazz musician, performing and recording an album at New York's Village Vanguard is akin to an opera singer performing at the Metropolitan Opera. Both of these accomplishments signify a milestone in an ...

Joseph Jarman/The Peter Apfelbaum New York Hieroglyphics QuintetBelarusan ChurchMarch 7 In the search for ever-more unusual venues, I journeyed to the Belarusan Church on Atlantic Avenue in Brooklyn, the current home of Connection Works. This is an artist-operated, non-profit organization that divides its resources between gigs and workshop activities, ...