Results for "Circle Down" 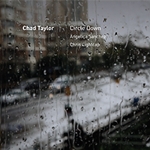 In-demand indie rock session player (Sam Prekop, Iron and Wine) and co-founder of the Chicago Underground with Rob Mazurek, drummer Chad Taylor has quickly become an indispensable part of the New York scene since his relocation from Chicago in 2000. His recurrent collaborations with Cooper-Moore, Jemeel Moondoc, and Marc Ribot feature his talents in a wide ...

With an insatiable appetite for music on the fringe, drummer Chad Taylor has been an active participant in the creative music environments of both Chicago and New York. In Chicago, he's been a member of Fred Anderson's trio, Sticks and Stones with Matana Roberts, and the Chicago Underground ensembles with Rob Mazurek. In New York, he's ...