Relocated to Copenhagen in late 2017, in his natal Madrid (Spain) he played in the house band of several jam sessions comprising more than 12 years of weekly stage routine. Arturo has played with the likes of Chema Saiz, Juan Camacho (CD La estrategia del tiempo, 2008; CD Artesanía popular, 2016), Sebastián Chames, Angel Rubio, and Inoidel González, as well as with various musicians from the American continent (Riner Scivally, Margaret Stowe, Virginia Ramírez, Brenda Hopkins, Paul Brewer, and Juliet Annerino, with whom he played in New York). He has also contributed original compositions for the jazz fusion band Tet-Quart (CD Silencio, 2010) and his Arturo Mora Group (EP Sign of the Future, 2014). 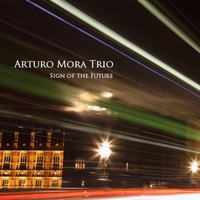 Label: Arturo Mora Rioja
Released: 2016
Track listing: The Call of the Gods (in memory of Esbjörn Svensson); Caliban's Release; What Will We Become?; Procrastination; Wanderings of the Mind