Meet Jeff Reed Jeff Reed is an acoustic bassist, electric bassist, composer, and educator residing in jny: Baltimore, MD. One of the most in-demand sidemen in the area, Jeff has performed extensively throughout the United States and throughout the world. As a sideman, Reed frequently works with bass vibraphonist Warren Wolf, trumpeter Sean Jones, and bass ... 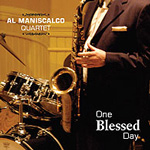 The first thing one notices about Al Maniscalco's tenor saxophone is its smooth, burnished sound. He has obviously worked hard on that, as he has on his explicitly laid-back delivery. The next thought that springs to mind is that Maniscalco is an accomplished improviser--on tenor or soprano--who always has a specific goal in mind and knows ...

Borders Books & Music Washinton,D.C. Baltimore resident, quartet leader, and saxophone instructor Al Maniscalco premiered his latest album release More In My Heart on Friday, June 13 at the Borders Books and Music on 18th and L, in D.C. While this was a difficult environment for musical transportation, for either players ...