By GLENN ASTARITA
May 6, 2015
Sign in to view read count
Track review of "Ev'rytime We Say Goodbye" 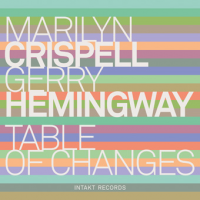 These distinguished artists performed together with pioneering saxophonist, composer Anthony Braxton's epic 80s ensembles amid other ensuing collaborations. Over time, drummer Gerry Hemingway and pianist Marilyn Crispell have gravitated towards the upper echelon of the so-called 'new jazz' outlook, as Table of Changes provides a glowing snapshot of their Europe 2013 tour. Moreover, the album extends various persuasions evidenced on their previous duo album Affinities (Intakt, 2011).

Their nonpareil kinship is an underlying factor via spontaneous improvisation, structure and stimulating mechanics, especially when they regenerate themes with undulating flows, iridescent hues and capricious dialogues.