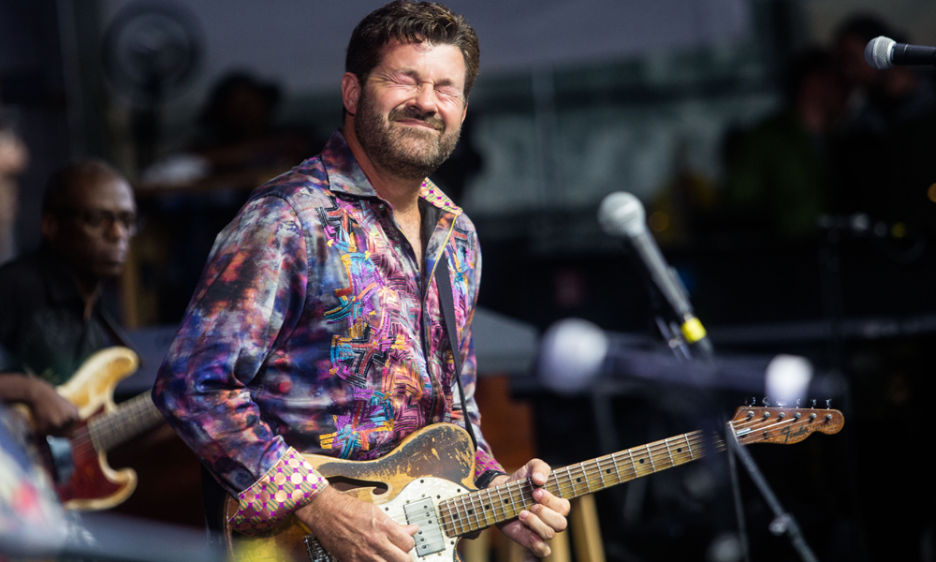 Benoit plays exclusively Fender Thinline Telecasters, principally two 1972 versions looking as if he rowed his pirogue with them and then used them as tent poles while duck hunting on the bayou.

The twin cities, Little Rock and North Little Rock, Arkansas have a secret. It is a perfect, medium-audience venue for music, theater, and assorted other presentations. The Center for Humanities and Arts at Pulaski Technical College is a warm and welcoming place that is clean, well-lighted, and, in short, grown up. Houma, Louisiana-native Tab Benoit said as much. "Yeah, that is scary. Everyone is paying attention." Cognizant of his (mostly) sober and well-behaved audience, Tab Benoit delivered an hour and twenty minutes of earthy, organic, fertile, and nourishing music. Yeah, that's what it is. Simple and searing, fundamental and transcendent.

Leading a trio featuring bassist Corey Duplechin and drummer Jeffery "Jellybean" Alexander (names right out of Dave Robicheaux's New Iberia) Benoit, in a beautifully unadorned fashion, played 75 minutes of southern Louisiana Swamp stew: blues, Ceole, zydeco, country, and R&B. Opening with the seldom heard Muddy Waters' composition, "Why Are People Like that," Benoit cruised through equal numbers of original songs and covers in a well-paced fashion. After 30 years, Benoit has mastered playing with minimal production while still achieving an ample and well-crafted drama in his performances. Hell, he does not even use a setlist. He is a complete professional, releasing his last studio recording in 2011, Medicine from which he featured a show-closing (and barn burning) performance of the title cut, as well as "A Whole Lotta Soul," and "Nothing Takes the Place of You."

Among the cover performances were Hank Williams' "Jambalaya" and Louisiana Leroux's "New Orleans Ladies," both dispatched with low-programmed authenticity smacking of the genuine article. Benoit puts the "home' in "down home." Equipment-wise, Benoit plays exclusively Fender Thinline Telecasters, principally two 1972 versions looking as if he rowed his pirogue with them and then used them as tent poles while duck hunting on the bayou. He runs these guitars through a two-amplifier setup, using two Category 5 signature models: a VOW 45 4x10 combo feeding a VOW 90. Benoit does not run these in stereo, rather he places an Neumann large diaphragm microphone in front of the two amps together, blending the sound of the two amps. The result is a dependably warm, slightly overdriven sound that Benoit orbits the entire show.

This stripped-down format presents Benoit well. He controls his sonic dynamics manually, using his volume knobs to their full effect. Benoit's grasp of the dramatic elements of his performance are keen and sharp. He alternates between using a pick and his right-hand fingers depending the dynamic he wishes to achieve. The show's coda was a striking display of carefully-modulated tension executed so that anticipation and release are maximized. The show closer, "Medicine," is a song built exactly for this place in the show. It begins with medium-slow stomping funk that allows for plenty of solo space. The encore "Night Train" picks up the pace and intensity, closing the show with power, grace, and authority. It is no mystery to Benoit's appeal. He is bona fide.

Setlist (approximate): Why Are People Like That?; A Whole Lotta Soul; Nothing Takes the Place of You; Solid Simple Thing; Lost in Your Lovin'; New Orleans Ladies; Dog Hill; Shelter Me, The Blues is Here to Stay; Jambalaya; Medicine; Night Train.