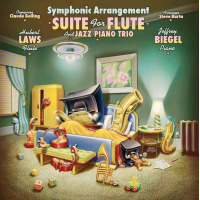 French composer and pianist Claude Bolling achieved what might be considered the best example the Gunther Schuller's "Third Stream" that elusive synthesis of classical music and jazz improvisation, in his Suite for Flute and Jazz Piano Trio (CBS Masterworks, 1975). Bolling composed the seven-part musical suite with his friend, flautist Jean-Pierre Rampal, in mind. The recording was very well received, nominated for a Grammy Award for Best Chamber Music Performance in 1975. Bolling and Rampal would go on to record the Suite for Flute and Jazz Piano Trio No. 2 ten years later.

While a durable composition with impressive staying power, Bolling's suite has not enjoyed many alternate interpretations. Naxos Records released a performance of both suites on the label's "Light Classics" imprint, performed by Giovanni Roselli and the Roselli Quartet. Roselli's performance is both solid and sacred, remaining close to the spirit of the original recording, but it lacks the jazz spirit of experiment and improvisation. That is where pianist/composer/arranger Steve Barta comes in and shakes things up.

Barta has always had a thing for the flute. His recordings Blue River (Self Produced, 2001) and Another Life Brazil (Self Produced, 2012) featured Herbie Mann, the latter recorded shortly before the flautist's death. Barta's empathy for Brazilian music and its part in the flute repertoire. Barta's present project has been a long time in the making. With the permission of the composer, Barta has reimagined Bolling's Suite for Flute a jazz Piano Trio in an enlarged symphonic setting. Barta himself has stepped from behind the piano to devote his efforts solely to arranging the suite, leaving the piano performance to Jeffery Biegel.

Barta's score was created for jazz piano quartet (with flute, performed by Hubert Laws), classical string quartet, and orchestra. The overall effect of "symphonic" treatment is a softening and deepening of the harmonic over the melodic structure of the suite. It is not unlike the effect of enlarging Samuel Barber's Adagio for Strings from a string quartet to full orchestra or the orchestration of Beethoven's String Quartets Nos. 14 (Op. 131) & 16 (Op. 135) as recorded by Leonard Bernstein and the Vienna Philharmonic (Deutsche Grammophon, 1992). Barta's undertaking is as ambitious as it is successful.

In this present orchestral guise, Barta brings forth a Dave Brubeck influence not heard in the reduced versions. Time Out and in particular "Blue Rondo à la Turk" are very much in evidence here. The effect is not one of imitation, rather it is an essence, or an aural fragrance that is present in the spirit of this performance. It swings easily and pianist Jeffery Biegel and flautist Hubert Laws display a kinetic connection that evolves throughout the suite. Barta's rethinking of Bolling's Suite for Flute and Jazz Piano Trio is an important event in jazz and one that is long overdue.