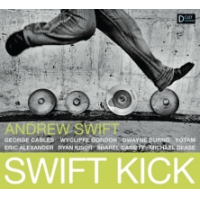 Drummer Andrew Swift belongs to a new generation of jazz artists that includes trumpeter Ryan Kisor and multi-instrumentalists Sharel Cassity and Michael Dease, all of whom join Swift on his debut recording, Swift Kick. These young artists are all well trained and steeped in tradition. However, tradition does not own their collective souls. All compose with a bright edge of intelligence and perform in the same way. This is smart jazz that does not brag or indulge in over composition or arrangement, meaning it is very listenable and enjoyable. Swift is joined on Swift Kick by other jazz luminaries such as trombonist/vocalist Wycliffe Gordon, saxophonist Eric Alexander, pianist George Cables, and vocalist Vanessa Perea.

It is with peer pianists Jeb Patton, Cassity and Dease that Swift properly gels. On the disc closer, "Understanding"—composed and performed by bassist John Lee—Swift demonstrates his rhythmic sorcery with a tom roll that gains traction on the smooth gravel of Cassity's bass clarinet, Patton's left hand, and Matthew Garrison's baritone saxophone, all of which project Lee's complex bass line. Curtis Stewart's violin adds a bit of old world charm to this contemporary jazz piece, finding the triple point between Jean-Luc Ponty, Svend Asmussen and Michal Urbaniak. Patton provides a clean and cogent Fender Rhodes solo that eventually makes its way to a Dease solo on the electronic trombone. The two principles, drummer Swift and bassist Lee, guide the song to its crisp coda with certainty and confidence. This is a great bunch of young musicians.