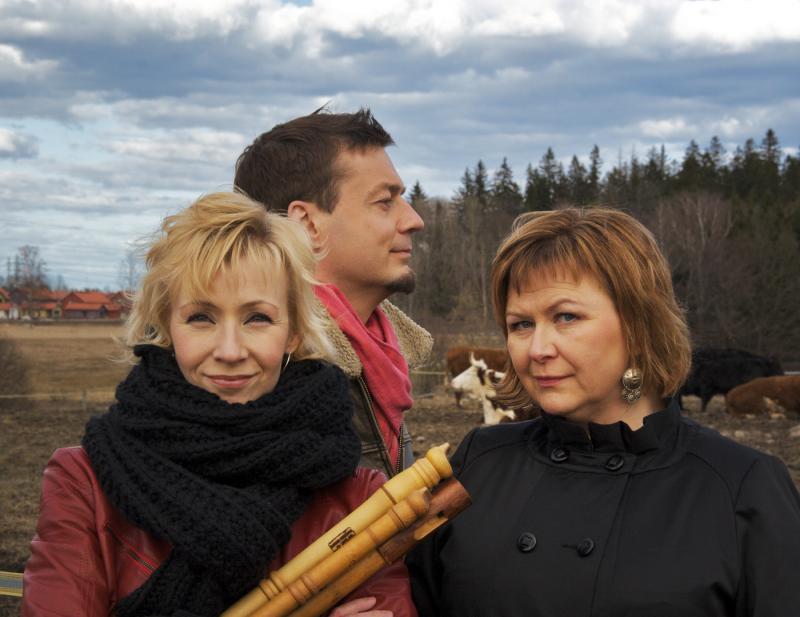 BY ANTHONY SHAW
May 4, 2012
Sign in to view read count
Suunta: An Exploration of Image and Imagination.
Helsinki Music Center
Helsinki, Finland
April 18, 2012

The very title of this project suggests that it is more than just a concert put together by three jobbing musicians, a musical experience with higher goals than just entertainment. The name of the ensemble, Suunta, means "direction" and was inspired by a visit to a planetarium and an introduction to interplanetary navigation. From this grew the idea of a navigated journey around our earthly world aided by the tools of traditional folk musicians, but put in a very contemporary context via state of the art mixing and sound manipulating as well as a continuously projected filmed backdrop. The location was the subterranean 300 seat hall in the bowels of the new multi-venue Helsinki Music Center that has been partly financed by the prestigious Sibelius Academy of Music, located nearby.

In a country renowned for its preference for decorum and more muted expression of emotions, the opening in 1983 of the Folk Music department under the auspices of the Sibelius Academy marked recognition that formal boundaries between genres were starting to crumble. Nowadays, internet generation audiences are eager for material that utilizes as eclectic a range of sounds as possible. Hence the mainly youthful audience in the auspiciously named Black Box hall respectfully received this 60 minute performance sitting in designer chairs, whereas a few decades ago they might have heard a similar assortment of instrumentation, echoes and chants accompanied by burning joss sticks, as they sat in lotus positions around a camp fire.

While part of the contributions from Anna-Kaisa Liedes were in the local language, the greater part was vocalization without words, using the tricks of the mixer's toolkit as well as her voice and vocal chords. Liedes has a long history in folk music and at its fringes. Her interest in vocal skills developed while studying at the newly created Folk Music Department of the Sibelius Academy, and she herself states that if she hadn't become a full-time folk musician, she would have tried to be a composer. Her fellow teacher in the folk department and in this project, Kristiina Ilmonen, has been playing wind instruments of various degrees of obscurity since the early 1990s—showing a preference for folk instruments, particularly shepherd's pipes and whistles, Ilmonen is best known in Finland for her performances with overblown flutes. In addition to vocal sparring with Liedes, she divided her attentions between echoing pipes and recorders, as well as a wide range of percussive objects around her, including various dangling rattles and a floating water drum.

The most easily identified Finnish contribution to the musical mix was from Timo Väänänen's kantele, an instrument traditional to northeastern Europe that has been played for centuries in Finland and the Baltic republics, typically to accompany poetry or song. Väänänen has played his part in bringing the instrument into the modern age, on this night using a 19-string, amplified instrument with all the usual effects thereby on hand. Aside from the typical ringing, bell-like washes that the kantele can build up, he also used a variety of plucking, strumming, and tapping techniques to add a rhythmic counter to the women's eerie, echoing vocalizing.

With the two women sharing vocals stage left and Väänänen hunched over his kantele to the right, much of the focus of the show was the thematic film produced by media artist Kati Åhberg. Starting with suitably sub-aquatic images, the audience was led around the world following themes reflected in the music, including shamanistic chants (from the tradition in Lapland), Buddhist meditations and even a hint of Koto drumming. The fact that all the musicians are also teachers in the Sibelius Academy leads to expectations of gravitas that can't be denied. However, intensely instrumental, part-improvisational music is typically appreciated by many modern audiences. This art-style, ethnic fusion is all but indistinguishable from the work of more ethereal contemporary jazz composers like Barry Guy or Evan Parker, and with its breadth of purpose, this is a boundary Suunta that easily permeate.