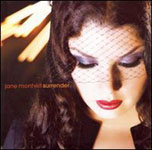 Merely possessing a good singing voice is overrated. Whitney Houston has a great voice but too often squanders it on material beneath her talents. Knowing what kind of music best suits your voice is an underrated quality and one Jane Monheit possesses in abundance.

Monheit is blessed with a dynamic instrument that possesses ample reserves of range, depth and style to spare. Surrender is her bid to move to the head of the class of contemporary vocalists. Monheit's voice and the sophisticated stylings of her band of ace musicians never pander, never insult the listener's intelligence, and deliver with this album one of the most thoroughly satisfying releases of 2007.

There's a cool confidence in Monheit as she delivers the goods on "If You Went Away." The flirtatious slinkiness of the title track, written by Peter Eldridge (her tutor at the Manhattan School of Music), is playful and sensual, never descending into the cartoon parody of seduction running rampant in pop music today.

Monheit's love affair with Latin music continues as she duets with vocalist Ivan Lins on "Rio De Malo." "Caminhos Cruzados" features harmonicist Toots Thielemans, while Sergio Mendes contributes piano on a drop-dead gorgeous rendition of his own "So Many Stars." A Monheit album wouldn't be complete without an Antonio Carlos Jobim tune, and here it's "Só Tinha de Ser Com Você," lovingly rendered with all the necessary sass.

It requires a certain amount of confidence to deliver the "huckleberry friend" lyric of Henry Mancini and Johnny Mercer's "Moon River," but confidence is a quality Monheit isn't short of. The unexpected but welcome treat of Surrender is Stevie Wonder's underrated gem, "Overjoyed," spiced up by Monheit's interplay with saxophonist Ari Ambrose.

There is a natural urge to gush over something as lush and smart as Surrender. In an age where what passes for good singing is barely a step up from what you might find in a Saturday night karaoke bar, Monheit is the real deal; a trained professional who has paid her dues and has now arrived as a fully accomplished artist.

It's hard not to pull for someone who respects music as diverse as Henry Mancini to Stevie Wonder, possesses one of the finest voices making music today, and doesn't dumb down her song selection to chase trends or pander for the attention of an audience that hasn't caught up with her yet.

This is the album Monheit has been building up to since her debut on the music scene in 2001. Beautiful women often have difficulty in being taken seriously, but the shimmering glow of her voice was never in doubt. What she would do with it was. The time has come to remove the qualifier of "promising new vocalist" from describing Monheit. Surrender is ample evidence that any discussion of premier singers delivering quality work in jazz and ballads has to include Monheit right along with Norah Jones and Diana Krall.