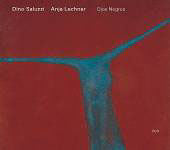 As of this writing, Ojos Negros, the new album of duets by bandoneón master Dino Saluzzi and classical cellist Anja Lechner, has been the subject of four glowing reviews at AAJ. Add to those Steve Lake's excellent liner notes and it would seem there is little else to say about this crepuscular and poetic record.

Except this. Lake's liner notes recount a favorite anecdote of Saluzzi's about his compatriot Jorge Luis Borges, thus nimbly putting the musician in the company both of Argentina's most celebrated cultural export (tango, the musical inspiration for Saluzzi's compositions and style) and its second most celebrated cultural export (Borges, arguably the twentieth century's finest writer).

This is an interesting juxtaposition given that Borges was famously ambivalent, if not downright hostile, to the tango. "Yes, we already know you don't like it, that you find it cheaply sentimental," novelist Ernesto Sabato said to Borges when the conversation turned to tango, in a series of published conversations from 1974/75 between the two. This is not entirely fair; Borges had written a highly sympathetic history of the tango a couple of decades previously, though the gist of his argument was that the form had already begun to lose its vim and vigor by the late 1920s (the very same time, according to Borges' biographer Maria Esther Vázquez, that the young poet was learning the dance steps and composing idiomatic tango lyrics in the more colorful arrabales—outlying neighborhoods—of Buenos Aires).

Where Borges and Sabato most emphatically disagreed was regarding the use of the bandoneón, Saluzzi's instrument. "There is something that does not signify the cheap sentimentality of the tango, and that is the bandoneón," Sabato tells Borges. "It is dramatic and profound, in contrast to the facile and picturesque sentimentality of its crazed and superficial brother, the accordion. How strange! In Germany it failed, and had to find its fate at the far corner of the earth, brought by some Hamburg sailor. Only this instrument could sing to death and solitude. It is an instrument of metaphysical resonance."

To which Borges, in uncharacteristically non-poetic language, replied, "I don't know, I can't talk about music. But I know I like tango when it isn't played with the bandoneón."

"Metaphysical resonance"—I can think of no more suitable description of Saluzzi's playing, and no better explanation of its appeal. Borges, in his history of the tango, wrote that a definition of the tango "promises no difficulties, but the French or Spanish composer who then follows it and correctly crafts a 'tango' is shocked to discover he has constructed something that our ears do not recognize, that our memory does not harbor, and that our bodies reject."

Contrary to Borges' declaration, Dino Saluzzi, not French or Spanish, but an Argentine born just as the tango lost its vitality (according to Borges), crafts a contemporary tango-derived music that our memories harbor and our bodies accept precisely because our ears recognize it. Borges was wrong, then, about the enduring capacity of the tango to reach us; but for as long as the Saluzzi/Lechner duets on Ojos Negros are playing, I don't think he would mind.