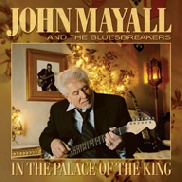 Ostensibly a tribute to the late Freddie King, this CD also serves admirably as a showcase of John Mayall and The Bluesbreakers themselves. The band displays both versatility and finesse on a combination of covers by the Texas guitarist as well as two originals. Meanwhile their front man exhibits his usual authority as a band leader, while at the same time demonstrating enough humility to pay righteous homage to a kindred spirit of the blues.

Mayall's pleasure in playing and singing is palpable on "You Know That You Love Me, and if that track, or "Living on the Highway, is not exactly innovative, that's not the point. The Godfather of British Blues has not always been inspired during the course of his now fifty-seven album career, but he's always endeavored to be and on this CD not one track of the fourteen is anything less than passionate and professional. Recent albums have betrayed a certain sense of ennui in Mayall's writing, but here "Time to Go is a bittersweet nod to his recently-deceased mother while "King of Kings faithfully keynotes the source point of this whole project.

The Bluesbreakers display a similar sense of commitment to the music and Mayall. On cuts such as "You've Got Me Licked the rhythm section of drummer Joe Yuele and bassist Hank Van Sickle recall Stevie Ray Vaughan's Double Trouble in their surety if not flair. And when guitarist Buddy Whittington takes over for vocals as well as lead guitar on "Big Legged Woman he demonstrates how he turns his limitations into strengths: the simplicity of his playing and lack of affectation in his singing focus his emotion.

Former Bluesbreaker Tom Canning offers keyboards on most of the album to add color to the mix. Mayall's own piano expands the sound on Now I've Got A Woman much as he uses harmonica on "Some Other Day or Some Other Time. The real bonus of production and arrangement here however, (apart from the beautiful sound achieved through Jon Astley's mastering) is the use of horns. Numbers including the title song add atmosphere as well as scope thanks to Lon Price and Lee Thornburg, while the stately sound they achieve on "Now I've Got a Woman hearkens to Mayall's own jazz-blues fusion. In a similar vein, guitarist Robben Ford, who accompanied Mayall & Co on a 2006 blues package tour, guests as leader and composer on the instrumental "Cannonball Shuffle."

In the Palace of the King is another valuable entry in the redoubtable legacy of John Mayall and The Bluesbreakers. There will surely come a time when they themselves are the object of the kind of sincere honor they pay Freddie King on this recording.

You Know That You Love Me; Going Down; Some Other Day, Some Other Time; Palace Of The King; I'd Rather Be Blind; Time To Go; Big Legged Woman ; Now I've Got A Woman; I Love You More Every Day; Help Me Through The Day; Cannonball Shuffle; You've Got Me Licked; King Of The Kings; Living On The Highway.

Title: In the Palace of the King | Year Released: 2007 | Record Label: Eagle Records