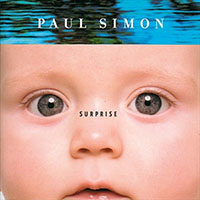 Paul Simon has been exploring and adapting his songwriting to the music of other cultures since the mid- 1980s, but strip away the arrangements from this material and you still have Paul Simon the singer/songwriter. The same can be said about Surprise. Instead of the world music stylings of Graceland (Warner Bros., 1986) or You're the One (Warner Bros., 2000), Simon radically shifts gears here. Collaborating with veteran producer/sonic landscaper Brian Eno, he has produced an entirely contemporary album that bears all the earmarks of his classic songwriting style.

From the distorted guitars and alt-rock drum sound of the opening "How Can You Live in the Northeast?," it's clear that while Simon has always followed his own path, he's also been aware of developments around him—both musical and political. Surprise may be Simon's most overtly political record, raising post-9/11 questions on both the opener and the gospel-informed "Wartime Prayers." But rather than express a sense of outrage, Simon searches for ways to live in an altered global landscape. As he says, "I'm trying to tap into some wisdom. Even a little drop will do. I want to rid my heart of envy and cleanse my soul of rage before I'm through."

Eno's sonic manipulations create an ambience that sounds unlike anything Simon has done before, but there's also a clear progression to this set. "Beautiful" possesses a highlife vibe, while Simon's use of lyrical repetition on "Once Upon a Time There Was an Ocean"—despite Eno's buzzsaw-like tone, which acts as a pulse at points during the song's evolution—harkens back to songs like Graceland's "I Know What I Know.."

Singer/songwriters are rarely accomplished instrumentalists, but Simon proves himself to be far more than a mere accompanist on his songs. He's supported by a host of veteran players, including drummer Steve Gadd, a longtime associate, and bassist Pino Palladino. With the exception of a guest spot by Bill Frisell on the optimistic "Everything About It Is a Love Song" and a rhythm track by guitarist Vincent Nguini on the deeply personal closer, "Father and Daughter," Simon plays every guitar part. There may be no virtuosic solos, but he demonstrates an astute ability to conceptualize multiple layers of acoustic and electric guitars. They may seem simple individually, but when combined, they create a rich aural tapestry.

So many artists from Simon's generation have been surviving on nostalgia or recording lackluster albums of jazz standards. A far better solution seems to be to continue testing oneself, keeping eyes and ears open in order to create present-day classics. And Surprise is just that, one of the strongest albums of Simon's long career.

How Can You Live in the Northeast?; Everything About It Is a Love Song; Outrageous; Sure Don't Feel Like Love; Wartime Prayers; Beautiful; I Don't Believe; Another Galaxy; Once Upon a Time There Was an Ocean; That's Me; Father and Daughter.