By FRIEDRICH KUNZMANN
April 13, 2020
Sign in to view read count 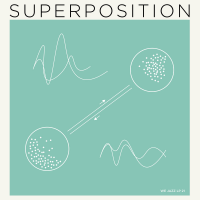 This outing by Helsinki-based jazz group Superposition is as bold as debut records come. In place of catchy melodies, the reeds focus on odd lines composed of small intervals. Instead of comfortable swing and funky shuffles, bass-and snare-drum work up a choppy sweat to wild cymbal blows. Not to mention the unstoppable double-bass fingers, running up and down the frets like a bullet climbing a staircase. Over the span of eight original compositions, Superposition presents an unquenchable thirst for the unexpected.

Drummer Olavi Louhivuori is arguably the most widely known member of this quartet—renowned among other things for his work with Tomasz Stanko as well as Finland's Ilmiliekki Quartet. The other members are Linda Fredriksson and Adele Sauros on saxophones and Mikael saastamoinen on bass. Each musician is of equal importance and prominence within the music. But democracy knows various faces: the album begins hectically. In "Antiplace" and "Bilawal" the group goes rumbling and tumbling down winding paths held together by quirky unison passages and lively dynamic arcs. Each instrument contributes in a highly percussive manner—be it the clicking and clacking of the saxophone buttons, the upper register, almost toneless frequencies of the bass, or the deconstructed drum inserts.

The first two blustering starters to the album however are deceiving. Sonic experiments based on few motifs and percussive impulses are presented on "Wasteland" and "Mimo," while compositions such as "Ballad No.3" and "Choral" find the four in a slightly more harmonious mood, relying on intimacy and fragile conversation. The only time the band lets melody prevail, in a truly melancholic and moody way, however, is at the very end. Closing meditation "March" is a tender affair built around simple melodic language and a subtle harmonic upward movement, serving as the perfect ending to an impressive debut set deserving of great acclaim.