By Tom Greenland
December 9, 2007
Sign in to view read count 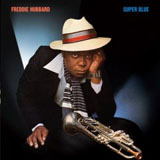 Freddie Hubbard's Super Blue, finally available on CD, is a minor classic—overlooked, perhaps, because it lies in the long shadow of the titan trumpeter's earlier output, or because it was recorded in the middle of a lackluster phase at Columbia.

But Blue is a late-summer sleeper. Reassembling some of the best talent from his CTI dates—Joe Henderson (tenor), Hubert Laws (flute), Ron Carter (bass), Jack DeJohnette (drums) and George Benson (guitar), plus Kenny Barron (acoustic and electric keyboards), a jam-mate from Hubbard's groups of the later 1960s—the session proves that commercial accessibility can coexist with high artistic standards.

In lesser hands, much of this material would sound like smooth jazz; here the interpretations are deep and wide, rewarding repeated listenings. The rhythm section, for example: Carter's acoustic bass is propulsive without edginess, layered with subtle timbres, while DeJohnette plays with a part-swing, part-funk feel that can only be described as 'Old' Jack Swing. Barron's keyboard is fluid and flexible, his acoustic solo on "Theme for Kareem an exposé of rolling accents and morphing melody bytes; Laws is technically brilliant, executing difficult lines with unforced grace; Henderson plays with scruffy precision, weaving in and out of the changes, rounding corners, sliding without skidding out of control; Benson's cameo on "To Her Ladyship boasts a ringing bell-tone and quicksilver finesse.

Hubbard, at the helm, is flawless; a miniaturist in his attention to detail and nuance, an architect in his mastery of form (check the tuneful arc of his solo over "The Surest Things Can Change ) and a pyrotechnician of the first order; his fiery, over-the-speed-limit improvisations on "Take It to the Ozone, "Kareem (both master and alternate take) and the closing vamp of the title cut are as jaw-dropping and finger-popping as anything he's done.