The Fred Hersch Trio: Sunday Night At The Vanguard 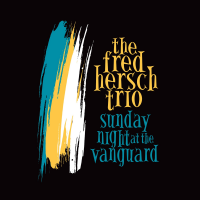 Hersch says this is his best trio album. Almost every artist says that about their latest—that this one's the best. But he might be right. The vote here would have gone to a studio recording, Whirl (Palmetto Records, 2010), a marvelous in-the-zone effort with this same trio—John Hebert on bass, Eric McPherson playing drums—until Sunday Night At The Vanguard rolled around.

The trio opens with Richard Rodgers' "A Cockeyed Optimist," which is not exactly a familiar tune, in spite of its authorship. But as an opener it works to perfection, with a silvery, raindrop intro that finds a quirky groove that paints an upbeat atmosphere, with a bright melody that sounds like a second cousin to "It Might As Well Be Spring."

"Serpentine," a Hersch original, is a wandering slither of a tune, unpredictable and spooky, lovely in its fluid, abstract way; "The Optimum Thing" sparkles; and "Blackwing Palomino," maybe the only jazz tune ever written for a pencil, has the feel of a new jazz standard.

Hersch's output has been consistently excellent, but sometimes—as on this special Sunday Night—the stars align. The trio, from the opening notes of "The Cockeyed Optimist," is locked into and to a telepathic interplay zone—playful and eloquent, elegant and assured.

The Lennon and McCartney gem, "For No One," has the forlorn desperation of the song's lyrical content. The Beatles' version—a masterpiece in its own right—didn't take things to this dark of a place.

Kenny Wheeler's "Everybody's Song But My Own" rolls in a restless, jittery mode. "The Peacocks," from the pen of Jimmy Rowles, is pensive, lonely. Hersch explores an almost unmatchable majesty of the tune, with a bit of dissonance, before he jumps into Thelonious Monk, with "We See," an irrepressible jewel, followed—as an encore to the show—the Fred Hersch-penned "Valentine," one of the more inward tunes in Hersch's songbook, counterpointing a mostly gregarious, effervescent set by one of the jazz world's top piano trios at the top of their game.

A Cockeyed Optimist; Serpentine; The Optimum Thing; Calligram; Blackwing Palomino; For No One; Everybody’s Song But My Own; The Peacocks; We See; Solo Encore: Valentine.