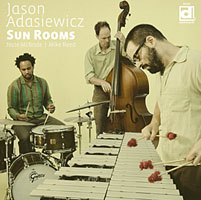 It's clear from Sun Rooms, perhaps more than from any of his previous efforts on record, that Jason Adasiewicz is offering something pretty personal. Sure, it's possible to name check both '60s-era Bobby Hutcherson and Walt Dickerson as points of reference, but they serve simply to highlight the fact that Adasiewicz is—for want of a better way of putting it—of a modern persuasion in both his composing and playing.

Thus, for all the echoes of Andrew Hill in compositional terms on "Life," the trio's sly, allusive interplay—emphasized in a far from predictable fashion by the leader's tone—is entirely its own. What's also notable is the ground the trio covers, rhythmically speaking. Mike Reed is habitually one of those exceptionally alert drummers, and it's certainly true that, here, he both lifts the proceedings and works for his band mates in a notable achievement of balance.

Another facet of the band's collective personality is revealed on "Rose Garden." As close as anything here to a vehicle for wide ranging play, the end result still retains a cohesion born of unity of purpose. By way of icing on the cake, Adasiewicz proves himself to be one of those soloists for whom mere technical display is anathema. His accompaniment during Nate McBride's bass solo is something else, too—the product of a rarefied harmonic sense.

"Off My Back Jack" is further out than anything else in the program, but in this trio's hands this is no mere striving for effect. The level of interplay, which can only be the product of deep listening, is extraordinary, and when the music coalesces, all three players come together in a manner as natural as breathing, resulting in a three-way conversation which, while referencing some of pianist Bill Evans's trios, is again pertinent as only a point of reference.

Duke Ellington's "Warm Valley" closes things, a reading which might take the piece as far as it's ever been on record. McBride's solo is a concise musical statement, before the trio takes the piece as a kind of languorous lope. Its performance of such a well-known piece emphasizes just how this group's collective voice has been honed by a shared and highly individual sensibility.