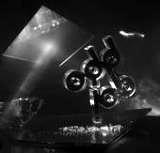 Swedish band Oddjob have been together since 2002, ploughing a melodic and groove-centric furrow built on the electric jazz-fusion of the 1970s, and staying the right side of "ambient" thanks to the brio and creativity which they bring to the music. On Sumo—their fourth album and ACT debut—the band have widened their sights to include funk, rare groove, chill-out and late 1960s psychedelic rock. It's a sonorous and playful mixture which is practically guaranteed to raise the listener's spirits.

Unlike many other retro-fusion bands, Oddjob's explicit debt to trumpeter Miles Davis's electric innovations on Bitches Brew (Columbia, 1969) and beyond is slight. Instead, the band's style is shaped by the work of a second generation of experimentalists, some of them—like saxophonist Wayne Shorter and keyboard players Chick Corea, Joe Zawinul and Herbie Hancock—alumni of Davis's early 1970s bands, who offered a sunnier vibe than Davis's turbulent soundscapes, with less dissonance and fewer dark corners.

A recipe for blissed-out background sounds perhaps, but not when it's cooked by the energetic Oddjob. Driven by the muscular riffs and ostinatos of drummer Janne Robertson and bassist/Moog player Peter Forss, saxophonist Per Johansson and trumpeter Goran Kajfeš's intricate, layered arrangements are the compelling centerpieces of most tracks. Both players are gutsy and expansive, with Kajfes, the chief soloist, eschewing the mute and Johansson favoring rich baritone or tenor over fusion's lighter, keening soprano (which he replaces when called for by mellifluous flutes). Playing around ten different instruments between them and making liberal use of overdubs, Kajfeš and Johansson create a steady flow of arresting textures.

Keyboard player Daniel Karlsson is another delight, whether soloing—which he does with straight-ahead conviction on acoustic piano and with primal funk on Hammond organ—or creating canvases for the horns. On "Painkiller," his rumbling Hammond—equal parts Jimmy Smith and Keith Emerson of The Nice—ratchets up the tension through the seven-minute playing time. On "Golden Silver," inspired by pianist Horace Silver's hard bop, and "Nostradamus," despite its title a bright and cheerful romp with James Brown-derived horns, Karlsson is joined by Stoffe Wallman, a synthesizer player with a background in chill-out but who here reveals a more characterful, foreground talent. Wallman's cartoonish tones on "Nostradamus" are funny and unexpected.

Fun is the prevailing vibe. The slow and elegiac "Like Josef," for Joe Zawinul, may strictly speaking be a dirge, but it's a cheerful dirge, a quiet celebration rather than a funeral march. Sumo is good medicine.