By HRAYR ATTARIAN
July 7, 2007
Sign in to view read count 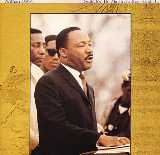 Good art is the product of the times, reflecting and often impacting the world it was created in, but great art transcends both time and space. Saxophonist Nathan Davis' Suite for Dr Martin Luther King is a great work of art. It is short but powerful like a bittersweet shot of espresso. Recorded in 1976 and initially released on his own Tomorrow International label, it is a great example of both his talents as a composer and saxophonist.

ADVERTISEMENT
The essence of the music is improvisation and jazz but it contains elements of soul, funk, R&B, spoken word, gospel and blues. The emotional essence is hope, infused by grief, anger and sadness. All these different styles and emotions fit together quite harmoniously producing a coherent whole. This is primarily due to the quality of the complex compositions and the virtuosity of the musicians involved. Davis plays a number of reed instruments on the record but solos mainly on soprano sax. His solos alternate with the expressive narration of Donald M. Henderson, the ensemble playing of the first rate orchestra and, on one cut, the ethereal vocals of Brenda Joyce. The music sounds fresh and unpredictable and has not dated at all, nor have the emotions they evoke.

Pony Canyon's CD reissue of this long forgotten gem has pristine sound and beautifully reproduced cover art and liner notes. Listening to this recording makes it hard to believe that Nathan Davis is not a more widely known and appreciated musician.