By Stuart Broomer
April 4, 2008
Sign in to view read count 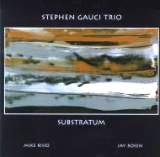 Perhaps no combination of instrument and style carries the predictability of the free jazz tenor saxophone and it's to Stephen Gauci's abiding credit that he manages both to embody a tradition and refresh it at every turn. The over-the-top blowout is, of course, part of Gauci's vocabulary. Eventually it will all show up: mystical yipping onslaughts, Pharoah-esque polyphonic bursts, the Ayler birth wail, the split-tones and multiphonics—everything that's made the tenor the expressionist's instrument of choice. But it's all deployed with the subtlest and most supple intelligence and there are contrasts that can startle.

Gauci makes effective use of the short heads he's fabricated here, using composition to delineate emotional zones clearly, areas of tonal concentration and rhythmic impetus, creating variety and depth at every turn and hinting at internalized voices from shakuhachi to swing. Sonny Rollins was likely part of Gauci's stylistic formation and he can build a solo out of well-placed and varied micro-figures, whether in compound dialogues with his partners—bassist Mike Bisio and drummer Jay Rosen, or traveling his own path through the surging rhythmic fields. It's often his introspective side that's most arresting. On "One That Got Away," Gauci lowers his volume almost to silence, using it to build drama and assemble meaning. The beautiful "Branching Streams Flow in the Darkness" feels both impassioned and somehow suppressed.

His sound is highly personal and flexible, at times a kind of twisted cry, an intense, warbling, yet muffled sound that carries as much feeling as any sound might. Along with his previous CIMP CDs and his 2007 Clean Feed date Nididhyasana, Substratum confirms that Gauci is among the most significant tenor saxophonists to emerge in recent years.

Threshold; Waking Down; Branching Streams Flow in the Darkness; Startling Suchness; This Cannot Be Lost; Song of Sundaram; Substratum; One That Got Away; When My Day Comes; The Dead Can Only Live; Here and Now.