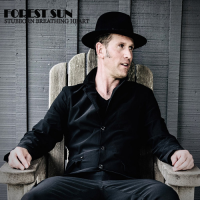 Evocative as is Forest Sun's name, that moniker mirrors the vivid music on Stubborn Breathing Heart. At this point, after ten plus albums in his discography, the Cali native has not wholly evolved into a original thinker, but his deeply earnest sense of purpose renders his work here inordinately charming. As does his penchant for the subtle topicality at which the album title hints: his forthright attitude transforms an otherwise somewhat transparently eclectic style into a credible semblance of modern folk music.

The very first cut, "Keep On Rollin,'" initiates a theme of resolute positivism that permeates the LP for the whole of its roughly thirty-eight minute duration. The reggae rhythm almost camouflages the gospel influences at the core of the tune as well as a humility that becomes prominent when the author, accompanied by Ingrid Serban, sings "Where Is My Home:" Forest Sun's voice itself carries a stalwart air in and of itself, but it is his delivery, along with that of his co-vocalist, that turns the song into an expression of optimism rather than despair.

Such wizened realism, along with the easy going gait of drummer Rob Hooper (Seth Walker, Carolyn Wonderland), ensures modesty becomes a fundamental strength of these performances. Yet the circumspect attitude doesn't preclude the ambition at the heart of this recording: the Alex Budman saxophone and Adam Theis trombone adorning "Something You Got" bring a salty air to the proceedings they might otherwise lack. In fact, on "Let Your Love Shine," a breezy arrangement of horns remains faithful to the Jamaican roots of the composition and, in so doing, accentuates the faith encapsulated in the title.

A similar ingenuity earmarks the sole cover on Stubborn Breathing Heart. During Chris Kenner's 60's soul classic, "Something You Got," co-producer/multi-instrumentalist Gawain Mathews distinguishes himself on electric guitar. Mathews also engineered these recordings at his own studio in San Pablo, an object lesson in self-sufficiency reflected in the economy of such cuts as "What It Takes." Not every number is as comparatively brief as the less than three minutes of "Paper Bridges," but the quick pace at which the twelve tracks proceed imprints an extended sensation of immersion in the moment.

The varied charts in the mix correlate to the layers of meaning in Forest Sun's lyrics. On such originals as "Already Home," for instance, the seeming contradiction of the words mirrors the rise and fall of the organ lines as they interweave with those of the electric guitar lines. And that action unfolds in as effortless a way as Sun sings "Help Me Find A Way," thereby illustrating how seamless is Stubborn Breathing Heart.

Keep on Rollin’; Where Is My Home; Just Because You Want It; Stubborn Breathing Heart; Something You Got; Let Your Love Shine; This Old Heart; Paper Bridges; What It Takes; Already Home; Help Me Find My Way; On My Way To You.