By GLENN ASTARITA
December 11, 2018
Sign in to view read count 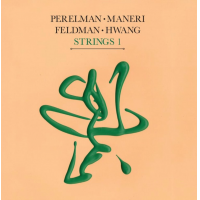 Strings 1 and Strings 2 are concurrent releases—the first of seven themed albums—that also could have been subtitled "The Art of Improvisation," hearkening back to tenor sax titan Ivo Perelman's 6-volume 2016 releases, featuring longtime collaborator, cellist Mat Maneri and others. Hence, the cellist appears on both of these new Chamber-like groupings as Strings 2 also features luminaries, cellist Hank Roberts and his first on-disc encounter with reedman Ned Rothenberg.

Here, world-class violinists Mark Feldman and Jason Hwang consummate the quartet. When multiple conversations occur, the musicians trade bountiful narratives amid streaming staccato riffs and intersecting exchanges that uncannily mimic human vocal characteristics along with vast expressionism and plenty of counterpoint. Perelman often underscores these works with sensitively woven lines and breathy intonations or raises the bar when the band engages in argumentative and passionate iterations.

Essentially, the band tethers their realm of opportunity with stirring improvisational tactics but craft sublime storylines even with microcosmic folkish themes on "2," where rustic strings parts serve as a launching pad for attention-grabbing mini-motifs that spawn calming effects and boisterous outbreaks. On a side-note, Perelman played cello for many years before switching to the saxophone, and he does handle the lower registers with the élan of a cellist. Moreover, the musicians merge exquisite lines with probing choruses and have a little fun along the way, especially when it appears they are dueling or challenging each another. As the press release notes, "they share an almost identical written range and tonal color..."

The artists' hyper-invention imparts a signal that they were revved-up for this session. On "5," transitory strings plucking episodes, are outlined and accented by the saxophonist, leading to the violinists' sinuous plot developments and movements that intimate a domino effect, as they mimic previously executed lines. But "8" contains rhythmic tapping sounds and Perelman's flourishing theme-building offensive, tinted with a touch of bravado and a few bars of minimalism, leading to sequences of flirtatious improv. In addition, "9" features the string section's sawing unison notes and renegade classical music digressions with a great deal of counteractive measures, tempered by Perelman's somber phrasings and a low-key and somewhat nervy sub-plot, fabricated with menacing intentions.

The musicians' remarkable synergy and effortless ability to dole out terse little stories in continuous fashion is irrefutably impressive. And there are numerous deviations, spiced with clear-sighted developments, as all of these works contain substance and are not constructed with extraneous or insignificant exchanges and buildups. In addition, the quartet incorporates fleeting melodic content. Nonetheless, Strings 1 earns a spot as a late entry to for consideration on the 2018 best-of list.