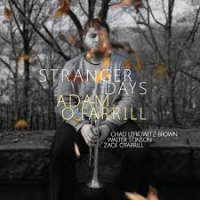 Trumpeter Adam O'Farrill is still very young, but that is not keeping him from making waves with his debut album Stranger Days and band of the same name, comprised of O'Farrill, tenor saxophonist Chad Lefkowitz-Brown, bassist Walter Stinson and his older brother, drummer Zack O'Farrill.

Of course, it does not hurt to have Chico O'Farrill as your grandfather and Arturo O'Farrill as your father either, and neither does his recent work with Rudresh Mahanthappa and his Bird Calls band, but his music and musicianship most assuredly stands on its own.

The set of ten compositions (eight by O'Farrill and two by Stinson) brings up the question as to what music in general and jazz specifically can be "about." Although an abstract, ephemeral thing, music can range from completely abstract (almost noise) where the building blocks (melody, harmony, rhythm) are almost absent to the completely concrete where the melody, harmony and rhythm work together in a completely predictable way (the tritest of pop music). Ease of comprehension generally correlate with concreteness, but this does not necessarily have anything to do with how much a particular person might "like" the music.

Apart from all of this, what some music is "about" has much to do with its emotional content and how it is communicated, and this is tied closely with the composer and performers, the latter much more important in jazz, and which is many times the same person or people.

The reason for the long introduction is that the music on Stranger Days has so many layers, and is "about" so many different things that it is shocking coming from someone so young. This is mature music with much to say; it is neither mainstream nor avant-garde, but takes chances within an understandable framework. Most importantly, these pieces tell stories, some more overt than others, and in then the end, these players become known to the listener.

Stranger Days is a real band whose members know each other well, which the music makes perfectly clear, and they want you to know them also. The cumulative effect of the album (Zack O'Farrill's liner notes state that the album should be listened to from beginning to end) is startling—the band is speaking, telling stories, their stories, through their music which is somehow simultaneously abstract and personally concrete.

It matters not if one knows the details of what any track is "about," although their order has an importance beyond pacing. All of this band's music has clarity, finesse, sharp wit and not a little bit of swagger. Although O'Farrill is the leader, the band is clearly a cooperative affair.

Stranger Days is a fabulous recording that sounds completely fresh and alive even after repeated listenings. Definite Best of 2016!

A & R Italian Eatery; The Stranger; Survival Instincts; Why She Loves; Alligator Got The Blues; Forget Everything You've Learned At School; The Cows And Their Farmer Walt; The Courtroom; Building The Metamorphosen Bridge; Lower Brooklyn Botanical Union.