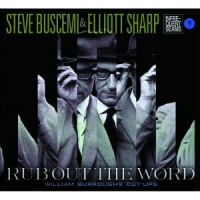 Is it significant that Frank Sinatra (1915-1998) and William S. Burroughs (1914-1997) were born just one year apart? Maybe. Sinatra began as a teen idol, before developing into American's bon vivant and arbiter of cool, and finally a cranky old man. On the other hand, the writer Burroughs was born a cranky old man, and perpetuated that image throughout his life. We loved him for his irascibility. It tempered his truths, by giving a reader a passage into his junky life, his homosexuality, and his explorations of death.

To mark the centennial of his birth, actor/director Steve Buscemi and musician Elliott Sharp performed selected writings from the Burroughs oeuvre. There have been excellent tributes to WSB before, including Hal Wilner's Dead City Radio (Island, 1990) and Spare Ass Annie (Island, 1993). More recently, Let me Hang You (Khannibalism, 2016) and William S. Burroughs In Dub (Echo Beach, 2014). Buscemi and Sharp's sample the written and not the voice, but I cannot think of a better emulator of Burroughs' crusty voice than Buscemi. He delivers the texts with just enough of the classic Burroughs croak. Sharp's accompaniment is minimal, pulsing strummed electric guitar and electronics into your veins.

Fans of Burroughs will recognize Dr. Benway's condescending elitism, his concepts of control, viruses, the theory of cut-up, Spare Ass Annie, and the man who taught his asshole to talk. Burroughs' words today are as significant as they were in the 1950s and 60s. His individualism, maybe more paranoid than rugged, is conveyed brilliantly by Buscemi and Sharp's Kafkaesque accompaniment which completes the picture.