By JAKOB BAEKGAARD
August 25, 2015
Sign in to view read count
Sounds are all around us. Some of them are so familiar that we barely recognize them. Music is a special kind of sound. It puts us in touch with the world or provides an escape from it. Sometimes, music is even able to conjure a world of sound that is hard to imagine. It can be done through artistic manipulation with an already known instrument or, perhaps, a strange instrument is introduced that is like seeing the world with a new pair of glasses. These two strategies come into play on two very different, but beautiful, and strange records from gyil-player SK Kakraba and saxophonist Jonah Parzen-Johnson. 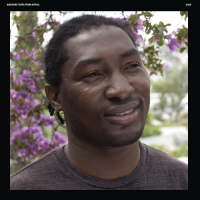 SK Kakraba originally comes from Ghana, but now lives in Los Angeles. He is a master of the gyil, which is a Ghanaian xylophone with calabash gourd resonators. The composition of the instrument is complex and is revealed in the press sheet that accompanies Kakraba's album of solo xylophone songs. Here, it is told that: "The buzzy rattle emitted with each note comes from the silk walls of spiders' egg sacs stretched across holes in the gourds, called paapieye in his (Kakraba's) Lobi language."

Fittingly, Kakraba's album is called Songs of Paapieye in honor of this special instrument. The music embraces all aspects of life, from pieces meant to accompany a funeral to a type of ancient lounge music. Information about each of the six songs is given in the detailed notes that accompany the album, but the music can be enjoyed simply as an exotic journey into an unfamiliar world of sound. The many tones and textures of the gyil, both muffled and clear, are captivating and the lively percussive rhythms speak about the life-affirming quality of the music. 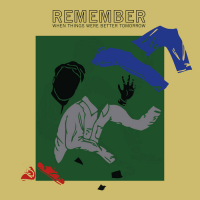 Jonah Parzen-Johnson's instrument, the saxophone, is less exotic than the gyil, but he twists his baritone saxophone into a landscape of strange synthesizer sounds that is very far from one of the earliest saxophone solo recordings, tenor saxophonist Coleman Hawkins' "Picasso" from 1948.

Parzen-Johnson uses circular breathing as a technique, which means that he is able to extend the sound of his instrument almost infinitely and create the effect of a loop. However, while he often incorporates drone-like segments, he also works a lot with variety and texture.

There is no horror vacui as such, Parzen-Johnson uses space and pauses intelligently. He can both play straight and clean, with melodic figures and little riffs, and make the saxophone sound like a bagpipe or a noisy insect.

Remember When Things Were Better Tomorrow is a record that is connected to the jazz tradition and yet seeks new musical paths, for instance, Neil Young is saluted on a surprising cover of "On the Way Home," paradoxically, the most straight saxophone reading on the album. Parzen-Johnson is also on his way home, but there is no nostalgia for the familiar, but a refreshing use of different musical tactics that create an ambient jazz album with an edge.

Remember When Things Were Better Tomorrow

Tracks: I Keep Thinking Sit Down; If You Can't Sleep, Just Shut Your Eyes; Never Stop Counting; Eyes Like Paddles; I Wrote A Story About You, Without You; Stay There, I'll Come To You; On the Way Home.