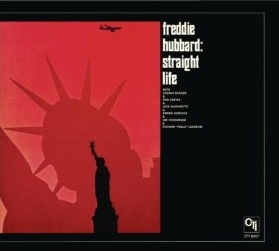 On the surface, Freddie Hubbard's Straight Life doesn't seem like a record that should have ever found much success on the CTI label. This record lacks any grandiose arrangements or classical-jazz crossovers, two of the three tracks are far too long to garner much airplay, and those same two tracks—"Straight Life" and "Mr. Clean"—are far rawer and more groove-oriented than standard CTI-issue material. That the programming is so odd—with a guitar and flugelhorn ballad following thirty minutes of soul-funk jamming—also adds to the potential for failure, but this was Freddie Hubbard in the early '70s, failure simply never entered into the equation during the trumpeter's 's heyday, and this record is no exception His brazen style, balanced by his beautiful ballad work, helped to make this record a classic, and CTI Masterworks is bringing it back as part of their fourth wave of reissues.

This particular release contains no bonus material or extra bells and whistles, which is perfectly fitting, considering the primal nature of its music. The title track opens up, appropriately enough, with Hubbard and drummer Jack DeJohnette exchanging calls of the wild. While Hubbard is the dominant force and leader, DeJohnette deserves the award for best supporting player on "Straight Life" and "Mr. Clean." He brings the same funky intensity to Hubbard's music that he brought to Miles Davis' early '70s oeuvre. In fact, "Mr. Clean" is probably the closest Hubbard ever came to Davis' sound from this particular era.

While groove trumps melody at first, and the solos reflect the loose-and-funky flexibility of the music, Hubbard's trip through "Here's That Rainy Day" couldn't be more different. He sketches around the structure of the song, and the loosely flowing garb that he uses to dress the melody in is a far cry from the adrenaline-fueled solo work of the previous tracks. George Benson's guitar proves to be the perfect partner for Hubbard's horn, as it fills in all the gaps, responds in kind to his warm horn gestures, and adds a rich layer of harmonic underbrush to the performance.

While Straight Life is occasionally overshadowed by Hubbard's mega-successful Red Clay (CTI, 1970) and First Light (CTI, 1971), this album represents the trumpeter's finest foray into sprawling funk-fusion, showing off yet another side of Hubbard's brilliant musical personality.