Craig Raymond & The Next Generation Big Jazz Band: Straight Ahead 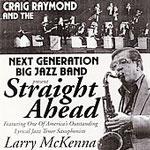 This seasond big band has been around for decades, previously under the direction of the current leader's father, Al Raymond; it has recorded over twenty albums, the last several under Craig Raymond. The aptly titled Straight Ahead features tenor saxophonist Larry McKenna. Boasting some of the finest East Coast musicians from the Philadelphia, Atlantic City and New York areas, this working swing-dance band has earned a following on the wedding, ballroom dance and university circuit. However, this extraordinary session is a departure from that mold.

With all of the recent West Coast big band albums making most of the thunder in the big band genre these days, it is refreshing to hear an East Coast orchestra than can blow the house down with the best of them. Unlike the average album with eight to twelve tracks, Straight Ahead includes a generous seventeen soft and swinging big band charts. Saxophonists Grant Whisler and McKenna provide the majority of the arrangements. Besides these two artists, Raymond's band also features Mike Brignola on baritone, Count Basie trombonist Al Grey, British pianist Pete Jackson and a special guest, clarinet master Buddy DeFranco.

The openning number, "This Could Be The Start Of Something Big," provides a clue of what you can expect throughout this disc. "Swingsville," like its title implies, is a wonderful dance floor number that packs a punch. Saxophonist McKenna delivers the first of several passion-filled solo performances on the sweet and melodic "Tenderly." He does it again on the emotional, heart-melting "I Wanna Be Happy." Staying in the mellow mood, saxophonist Jeff Darrohn lends a moving solo to the slow ballad "Street Of Dreams."

Buddy DeFranco's arrangement of "I Remember Clifford" provides a dazzling display on clarinet. DeFranco stands front and center again on the familiar Weill & Nash composition "Speak Low," which roars through in an upbeat big band fashion. The group wraps it up with another rousing ensemble piece, "Orbit," which showcases Mckenna's skills on both tenor and alto as the band makes one final collective musical statement.

I found myself listening to this album often because there is so much here to enjoy. Whether you're looking for the sound of swing, you wish to relax to a slower ballad, or you just want to enjoy some straight jazz, you can find it all here. McKenna really shines and makes a compelling argument that he's one of the best reed players in the business; Raymond's band thunders through with an explosive and powerful performance.

This Could Be The Start Of Something Big; Swingsville; Tenderly; It's A Wonderful World; But Beautiful; Sorta Blue; Nite Train; Street Of Dreams; I'm Forever Blowing Bubbles; I Remember Clifford; Don't Be That Way; I Wanna Be Happy; Polka Dots and Moonbeams; I Wanna Be Loved; Speak Low; Theme From Jacqueline; Orbit.