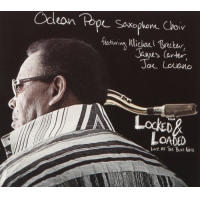 On Locked and Loaded, Odean Pope and his saxophone choir offer up lush, drum-tight voicings as gorgeous and rich as any golden age big band section, then shift gear from full-throated crooning to full-throttle blowing with no audible effort. The first two tracks, both Pope originals, set the agenda: the standard-ish ballad "Epitome," which is nearly devoid of improvisation, is followed by the wildly swinging "Prince Lasha," which is just about all improvisation, and free at that. Pope plays both games expertly on tenor and his inspired choices for counterparts—Michael Brecker, James Carter, Joe Lovano—dig down for their fieriest, most liberated and committed work heard in some time.

Compositionally, Locked and Loaded is most entertaining and original on the up-tempo pieces—the aforementioned "Prince Lasha," a strong rendition of "Coltrane Time" and Pope's jaunty "Muntu Chant" are the standout tunes—but this is pretty much a flawless recording, which is even more impressive given it's from a live performance.

The less-than-famous rhythm section handles its duties with great skill and brio, and there are several other reed players who didn't make the marquis, including the underappreciated Philadelphian tenor master Elliott Levin. All the horn playing is first-rate, but it's Pope's show and he has no fear of the spotlight. His adept solos, plus one by Brecker that sounds as if he gave it all he had, are highlights.

A very lucky Blue Note crowd got wowed by these shows and some angel saw fit to make a top-shelf recording so we could enjoy it in the comfort of our homes. Locked and Loaded ought to make Pope's reputation even stronger and win him a spot on a few top ten lists.