By Glenn Astarita
December 22, 2006
Sign in to view read count 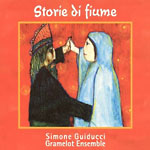 Guiducci's signature invocation of jazz and Italian melodies is something of a trademark sound. At times peaceable and slightly raucous, the leader commandeers linear progressions with veteran woodwind player Achille Succi, solely performing on clarinets for this studio date. Yet the band also turns up the heat in spots, and the soloists deliver scrupulously designed choruses, often based upon memorable hooks amid a celebratory vibe. For example, on "Prima Della Pioggia, Succi and accordionist Fausto Beccalossi generate a sanguine theme as they seem to summon the peaceful aspects of dawn.

Guiducci's meticulous phrasing often sparks gradually climactic opuses which ride atop Beccalossi's pumping lines and the rhythm section's driving pulses. In various spots, the ensemble tempers the flow when an air of romance shares the field with heated jazz choruses. Nonetheless, Guiducci is in peak form here—and many of us wouldn't assume anything less from this cutting-edge stylist.