By CELESTE SUNDERLAND
February 27, 2008
Sign in to view read count

In December, 2007 Italian pianist Stefano Bollani got the chance to play in one of Rio de Janeiro's poorest places, the favela. For most, performing in such a dreary locale would not be so pleasant, but for Bollani it was extraordinary. "They never have concerts there," he explained. "It's the poorest place on Earth and there was a stage with a grand piano and playing my music in front of these people was amazing. They were incredible, saying, "Here is a pianist from Italy! He came to play for us!' They were so proud of that. I have been told this was the second time in Rio de Janeiro when they brought a grand piano inside the favela. The first time was for Antonio Carlos Jobim."

Lately, this sort of situation has been springing up quite a bit. Not grand pianos in the favela, but Bollani's name listed in important places among those of the masters. AllAboutJazz-New York dubbed him "Musician of the Year" for 2007, alongside Dave Brubeck, Ornette Coleman, Charles Mingus and Sonny Rollins; The Guardian once called him a "21st century Art Tatum" and just recently he was awarded the prestigious European Jazz Prize. Bollani said his humor and entertaining stage presence were big factors in the jury's decision. This pleased him immensely. "Jazz in Europe is a serious thing," he said. "In Italy there are a lot of people saying "He's a very good pianist but why is he doing silly things or telling jokes?' They think this does not help the music. So I was very happy to see an international jury say that that's positive."

New York audiences will get the chance to witness some of those unorthodox stage antics in February, 2008 when Bollani, trumpeter Enrico Rava, bassist Larry Grenadier and drummer Paul Motian play Birdland. After the four-night run, the quartet, joined by saxophonist Mark Turner will head to the studio to record a new album for ECM. 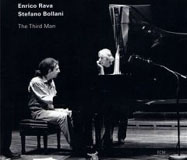 Bollani and Rava have shared a close association for nearly twelve years. In 1996, at a point when the Milan-born pianist found himself immersed in the pop realm, playing mostly with Italian singer Jovanotti, he made Rava's acquaintance. The venerable trumpeter lured him back into the jazz world, a place where, in his heart, Bollani always existed. "I was playing in front of eight thousand people," he says of his time with Jovanotti. "It was something special for a twenty year-old guy. But as soon as I had the chance to devote myself to jazz I jumped on it."

The pianist was never one to sit around. Listening to Scott Joplin records at the wrong speed—45 rpm instead of 33—and lessons with pianist/composer Luca Flores from age eleven compelled Bollani to play fast. Quickly, he mastered a rapid and versatile technique. On his gorgeous solo album from 2006, the aptly titled Piano Solo (ECM), Bollani rambles through complex improvisations; hammers out a sophisticated rendition of "Maple Leaf Rag;" infuses Prokofiev with a dose of personal lyricism and arranges the epic Beach Boys track "Don't Talk" for the lone grand piano.

His combination of dense classical foundations and flirtatious melodies is characterized by spry exuberance. He takes raging, counterpoint-rich chord progressions and contrasts them with beautiful, often magical original compositions like "?"Promenade," from Piano Solo. It's this element of tranquil vitality that he brings to his duo album with Rava, The Third Man (ECM, 2008). Though the pianist was born the same year Rava released his first album as a leader, Il Giro del Giorno in 80 Mundi (Black Saint, 1972), the pair enjoys a communication that transcends the generation gap.

"When I got the opportunity to play with him it was one of the happiest moments of my life," he said of the night Rava sat in with his trio in a small town near Florence. "As soon as we started there was no problem, I understood what he wanted, he was listening to me all the time and really trying to play together, which was incredible because he was a guy with great experience."

When Rava invited Bollani to join him at a concert in Paris with bassist Michael Benita and drummer Aldo Romano, things didn't go as smoothly. "The first night my solos were so short because I didn't want to disturb the other musicians who were masters of jazz," he explained. "Enrico came to me during the pause, I think that was the last time in my life I saw him a little angry with me, he said, "Why are you playing such short solos? Why aren't you playing? We are in Paris, just play as you can.' I said, "I am a little shy because you play so well and I don't know if it fits.' But then I started playing solos, from that moment on I started enjoying the band." 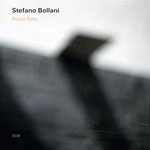 Bollani has recorded over a dozen albums with Rava. He has also worked with Lee Konitz, Pat Metheny and Gato Barbieri, to name a few. And he has several of his own groups. With L'Orchestra del Titanic, a quintet he put together in 1995, he released two albums on the Via Veneto label. A year later he put out Les Fleurs Bleues, a trio album with bassist Scott Colley and drummer Clarence Penn, on the French label, Label Bleu. That same label released the self-titled album by his other quintet, I Visionari, in 2006. The last album the group made was meant to be a movie soundtrack, but that fell through, so now Bollani is looking for another way to release it.

With his "Danish Trio" (bassist Jesper Bodilsen, and drummer Morten Lund), Bollani explores Scandinavian territories. Their 2005 album Gleda (Stunt) is based on Nordic tunes. "He has a unique and wonderful ability to surprise you night after night after night," said Lund. "There's never even just a slight dull second in his playing. I truly believe he is a magician of sounds and emotions, and he is able to communicate with, and capture, an audience in a way that is totally unique in the jazz world."

At age five, belting out Italian pop songs was Bollani's biggest joy. Somewhere along the way playing ragtime piano surpassed the fun of vocal tra-la-la, and by age eleven, having enrolled in the Luigi Cherubini Conservatory of Florence, Bollani was on a course toward classical virtuosity (with jazz the ultimate goal). He's known for the impromptu medleys he puts together at the end of a performance. Mixing Gershwin with Billy Joel, tunes thrown out from the audience, he concocts an entertaining stew. They flow easily, one into the other, a sundry assortment linked by Bollani's original touch.

At thirty-five, he still likes to sing. (See "Che cosa sono le nuvole" on I Visionari). But he'd gladly hand the microphone over to Caetano Veloso, the singer he "loves most in the world." He once met Veloso at a sound check in Brazil and a few days later heard about an interview with the singer that appeared in a major Italian newspaper. "He was asked, 'Why don't you think about an entire recording of Italian songs?' He said, "I would love to do that but I don't know so many Italian songs, but it would be great if I could do a duo with Stefano Bollani because he is a musician that I like.' So now I'm chasing down Caetano Veloso. To go into the studio with Caetano Veloso would be a dream come true."