BY JAKOB BAEKGAARD
February 5, 2019
Sign in to view read count

Pasborg has never stopped 'playing' in both senses of the word.

Danish drummer Stefan Pasborg has never been afraid of throwing himself into ambitious experiments. He released the acclaimed triple album Triplepoint (ILK Music, 2007), has played a six-hour concert with his organ funk trio Ibrahim Electric, and translated the Russian composer Igor Stravinsky's universe into atmospheric jazz rock on the album The Firebirds (ILK Music, 2015).

Like his mentor, Danish drum icon Alex Riel, Pasborg has a gift for hearing rhythms, and has played since Riel gave him his first drum set at age three. One of the most admirable things about Pasborg is that he has never stopped "playing" in both senses of the word. While he is a serious and restlessly experimental musician, he is also having fun, and his exploration of melodies, sounds, and textures is a foray into an open, inquisitive space rather than an exclusive intellectual exercise. Pasborg also effortlessly bridges the gap between avant-garde and mainstream. This negotiation between jazz and popular music can also be seen on what might be Pasborg's most ambitious effort yet: a series of six vinyl EPs that embrace almost every aspect of his artistry. 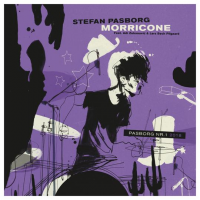 The first volume in Pasborg's series of mini albums is an investigation of the music of Italian composer Ennio Morricone, who is especially known for his iconic soundtracks to filmmaker Sergio Leone's westerns. In the liner notes, Pasborg reveals that the project has its origin in a theatre concert at The Royal Danish Theatre in 2016.

The lineup on Morricone consists of Pasborg, keyboardist Adi Zukanovic, and the versatile experimental guitarist Lars Bech Pilgaard, the man behind the groups Svin and Klimaforandringer. The album starts with a surf style reading of a "Few Dollars More" and Zukanovic making the keyboard sound like a battered organ. There are also elements of stoner rock, but the real achievement of the album is the interpretation of "Man With A Harmonica" and "Man With A Harmonica (Revisited)." In these pieces, the group grasps the full cinematic scope of Morricone. The vertical, barbed wire lines of guitarist Bech Pilgaard reveal the pain of the past that the character carries around. It's a pain that Morricone translates brilliantly into unsettling harmonica blues that becomes a motif in the movie, and this theme is reconfigured congenially by the group. 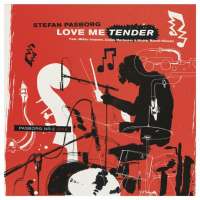 Elvis Presley and Albert Ayler seems like an unlikely combination, but in Pasborg's musical world anything can happen. In fact, the combination of Elvis and Ayler is not that far-fetched. While the crooning rock 'n' roll of Presley and the powerful free jazz of Ayler seem stylistically unrelated, they have common ground in gospel. Ayler was deeply inspired by gospel spirituals and Presley never lost his love of gospel songs.

Pasborg's group Free Moby Dick connects the dots between free jazz, rock 'n' roll, and spirituals, delivering two inspired readings of "Love Me Tender" with the screeching, distorted saxophones of Mikko Innanen on baritone and Liudas Mockūnas on tenor, and the nimble electric bass playing of the late Nicolai Munch-Hansen . Pasborg easily navigates between powerhouse rock drumming and subtle cymbal shades, taking the energy of rock riffs and combining it with the advanced improvisations of jazz. The songbook on this mini album also includes tunes by Led Zeppelin, The Doors, Wolfmother, and Tom Waits. 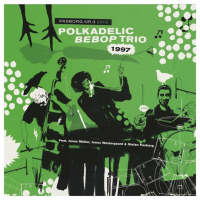 The idea of using a popular song or a standard for improvisation is a foundational trope in jazz, and Pasborg was already knee-deep into original interpretations of music as a young man. 1997 is a re-release by Pasborg's band Polkadelic Bebop Trio, with pianist Jonas Müller and bassist Jonas Westergaard. The music marks the very first time Pasborg was heard on record but, as he says in the sleeve notes, "I do not release this music out of sentimental or nostalgic reasons. I simply believe that it deserves to be released properly on vinyl, because I think it sounds great."

It sounds great indeed. The three Danish folk songs and one original by Müller brim with youthful energy and surprising twists and turns. The simple, childlike melodies of "Hønsefødder og gulerødder" and "Højt på en gren en krage" are turned into virtuoso piano jazz exercises that keep their charm. A title like "Ritcsch ratsch filionggonggong" points to the Dadaistic joy of this trio: melodic, playful, experimental, and far from solemn. 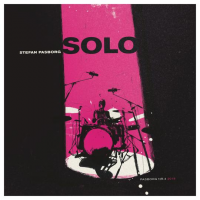 The fourth release in Pasborg's series of vinyl EPs is perhaps the most interesting. Solo provides the first opportunity to hear Pasborg all alone with the drums. As he says himself, "No overdubs, no backtracks. Only the sound of sticks, skin, and metal objects. One-hundred-percent improvised in the moment."

This mini album consists of two suites, "Metal and Skin 1" and "Metal and Skin 2." Behind the simple titles lay two complex journeys into sound. Pasborg uses the complete range of his instrument, from booming rhythms to subtle colorations. His knowledge of all kinds of rhythms shines through in the different strategies he uses to create a story built around figures, rhythms, and landscapes of sound. Like a true storyteller, he employs these effects to create exciting musical patterns, like when he ends a suite with a marimba-like coda, conjures an enticing effect of double-layered cymbal sounds, or builds a polyphonic wall of rhythms. 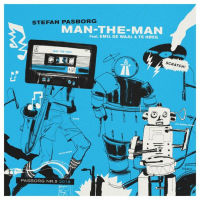 The glacial machine sound of early German electronica is given a solid dose of vibrant percussive rhythms. Saxophonist TS Høeg adds sweet horn lines and a text with a clear message: "Upright walls? No!" Genre walls are broken down and string samples are thrown in for good measure. Emil de Waal brings in all sorts of quirky electronic and percussive sounds. There are two epic tracks on the EP, one of them a medley of two tracks. It all ends with a gramophone loop and Høeg's saxophone. 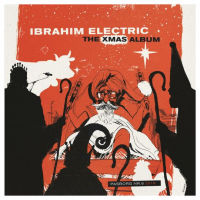 The final record in Pasborg's series of EPs is a Christmas record by his regular band Ibrahim Electric. They spread joy everywhere they go and deliver their contemporary take on the soul jazz trio format of organ, guitar and drums. On The Xmas Album, they take the clichés of Christmas songs and twist them in their own joyful way. For instance, "Last Christmas" is discofied by Pasborg's beat. He even takes the plunge as a Presley-style crooner in a sweet duet with his partner Marie Bech Hansen on "Blue Christmas." It's twangy, funky, and fun, as well as a little corny, but in the musical world of Pasborg there is room for all kinds of music and moods.

These six short vinyl albums present a musical world that gives a well-rounded portrait of Pasborg the drummer, composer, and musician. They are delicately presented with unique cover artwork by Rasmus Meisler and can only be heard on vinyl—no digital versions are available. It is a subtle statement by Pasborg, pointing to the fact that music is precious and requires dedication and immersion. This is music meant to be heard one side at a time, not as a quick digital click in a sea of possibilities. These six mini albums constitute their own world of vinyl.