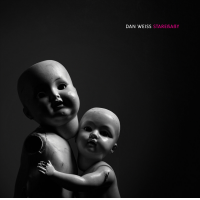 It is always interesting when a musician's newest release zigzags away from previous works, making an abrupt change of course. Often it happens at the request of a producer or record company, and probably because his/her previous disc was not well received. This in no way explains Starebaby by drummer Dan Weiss. Sixteen: Drummers Suite (Pi Recordings, 2016) and Fourteen (Pi Recordings, 2014), both larger ensemble recordings, composed and arranged by the drummer were critical successes. He could easily have continued down the same path.

Not a chance. He assembled a cast of superstars; keyboardists Craig Taborn and Matt Mitchell, guitarist Ben Monder, and bassist Trevor Dunn to create a jazz-meets-doom metal power lunch at the corner of electro and acoustic street. A piece like "The Memory of My Memory" hits as hard as anything by the band Blind Idiot God, where massive hulking bass line and thunderous drums follow a dream sequence of echoey synth notes and a guarded piano. The music was inspired by David Lynch's TV show Twin Peaks and "Badalamenti" is dedicated to Angelo Badalamenti who wrote the soundtrack for that show. Eerie doesn't begin to describe the music. Painted at night, the music is propelled by Weiss' varied pulse. He draws from his background in Indian drumming and his association with the sludge metal band Bloody Panda to propel this session.

Please don't get the wrong impression. This recording is as thoroughly composed and orchestrated as his large ensemble recordings. Weiss brings that same musicianship to this heavy metal plus outing. Where a metal band might be a one trick pony, Weiss has the talents of Mitchell and Taborn to create elaborate piano and synthesizer confections. Both work in pulse and dissonant effects, as does Monder, whose guitar work ranges from chamber music to chainsaw shredding. With Trevor Dunn on bass, Weiss has circled back to the days of Fantômas and Secret Chiefs 3, but with a mutated DNA that allows for stronger melodies and more compelling instrumental interactions.