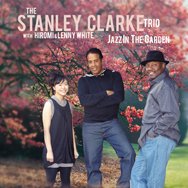 Stanley Clarke Trio
Jazz In The Garden
Heads Up International
2009

In the mid-1970s when Stanley Clarke rose to prominence playing electric bass in the powerhouse band Return To Forever, it had been his beautiful touch on acoustic bass that originally attracted the notice of the band's founder, keyboard player Chick Corea. The rock star flash and approbation that accompanied his ensuing solo efforts and collaborations with everyone from keyboard player George Duke to guitarists Jeff Beck, Keith Richards and Larry Carlton and drummer Billy Cobham—and even latter day assemblages with guitarist Al Di Meola and violinist Jean-Luc Ponty, etc.—tended to obscure these deep roots to such an extent that it was unlikely many of Clarke's large worldwide fanbase ever heard his virtuosic early work.

Thirty-seven years later at 11:00 on a Sunday night, Clarke was about to change all that. It was the end of the last day of studio time booked for his trio recording Jazz In The Garden. Everyone was bone-tired and ticketed for flights home early the next morning. But Clarke stood up from the mixing board and headed for the door, stating flatly, "It just doesn't swing. I don't feel like trying to explain why."

Clarke wasn't ready to compromise. His insistence that the tune was going to swing came from the same aesthetic clarity he had displayed from the beginning of his career in his brilliant ostinatos and solos on Corea's groundbreaking Return to Forever, recorded for ECM in 1972 when the two of them were still playing with saxophonist Stan Getz. On this, his first-ever acoustic trio outing as leader, he was going to get what he wanted. Plus, he was on a roll, coming off Toys of Men (Heads Up International, 2007) and his work with bassists Marcus Miller and Victor Wooten on Thunder (Heads Up International, 2008), some of the best electric jazz fusion he'd done since Journey to Love (SBME Special Mkts, 1973) and School Days (SBME Special Mkts, 1976) back in the day. Maybe even better. He was ready to finally bury the past, or at least bury the critics who had accused him of inconsistency, commercial pandering and gasp, abandoning jazz to write film scores.

Drummer Lenny White had pushed up from his comfortable chair and followed Clarke down the hallway to help sort things out with his close friend. He understood the difficulties of musical politics, the frustrations born from artistic integrity. He understood high standards. A few minutes later everyone was back at the mixing board and editing.

Earlier in the evening White had gotten into a discussion over an edit that sounded wrong to him. No matter how often it was played, the engineer couldn't hear it. To ease the tension of the moment, White, ever the diplomat, then told the story of having recorded with trumpeter Freddie Hubbard on Red Clay (CTI, 1971), the seminal masterpiece now revered in the jazz world as one of the early musical grenades that detonated the explosion of the 1970s. White's comment was simple: he said that, ironically, he could not bear to listen to the recording for 20 years after it was recorded, because all he could ever hear were his mistakes! When he'd left the room earlier to go see Clarke, his purpose wasn't to talk him into a compromise. It was to bring him back into the room with his vision intact.

The politics of this collaboration known as Life are about necessary compromises and the changes they bring. Thus the opening track, a mad dash called "Paradigm Shift (Election Day 2008)" with its tumultuous parade of time signatures and colorful vignettes, which ushers in an assortment of tunes that are at once ambitiously controlled and wide open. The tonal atmosphere for pianist Hiromi's beautifully understated soloing on "Sakura Sakura" and "Sicilian Blue" is created in both cases by the measured heartbeat of Clarke's lyrical bass lines.

White's timekeeping from the get-go is a crisp series of imaginative punch and counterpoint on cymbals and snare that propels one phrase into the next so that by the third track, things are hopping. "Take the Coltrane" is like a drum 'n' bass breakbeat in low gear, a deconstucted, kicking-mule version of pianist Duke Ellington's and saxophonist John Coltrane's duet that clocks in at 3:30, but performed live, could be stretched through a thousand funky variations. Clarke's wryly-titled composition "Three Wrong Notes" is an instant classic in the melodic tradition of pianists Bud Powell or Dave Brubeck with a hook that Hiromi devours like Thelonious Monk eating the piano. After a delicate, heart-rending version of "Someday My Prince Will Come" it's back to swing-time with Joe Henderson's "Isotope," a ferociously syncopated bop-fest. All of which leads to Clarke's a capella "Bass Folk Song Nos. 5 & 6," two simple, beautifully calming jazz lullabies poured like emollient oil on the troubled waters of our time.

After Clarke's solo the remaining tracks form an Act II which, among other things, showcase Hiromi's burgeoning skills in abstracting a blues form and voicing chords. Her bouncing duet with Clarke on "Global Tweak (Improvised Duet)" jumps right into one of trumpeter Miles Davis's catchiest hooks on a sweetly infectious "Solar," and finally a twist on her own flashy "Brain Training" that ends with some deft unison prancing guided by one of White's sure-handed breaks.

The choice of the Red Hot Chili Peppers tune "Under the Bridge" to close things is surprising at first, but only because the somberness of the original's easily-conjured lyrics seem so contrary to the preceding tunes' joyous verve. Through the magic of sounds and rhythms, these skilled musicians render the love song, written for the crazy sackful of contradictions that is the city of Los Angeles, into an anthem celebrating growth, harmony and reformation.

And, Mr. Clarke: it really swings.