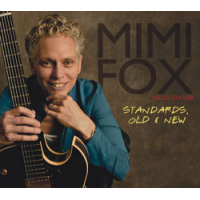 Guitarist Mimi Fox's nearly 30-year career has produced several solo standards recitals. Standards, Old & New steps out of the box for some not-so-standard standards from the folk realm (pastoral arrangements of Woody Guthrie's "This Land is Your Land," The Beatles' "She's Leaving Home" and Bob Dylan's "Blowin' In The Wind") and more recent jazz (a marching rendition of pianist Chick Corea's "500 Miles High").

Fox received kudos from guitarist Joe Pass before his death and it was certainly warranted. As a player, Fox has much in common with Pass; while not indulging in the same verbosity, she does retain—and eventually perfect—a similar approach to chording and melody.

Solo guitar recitals offer the performer no place to hide. Fox has no problem filling in the blanks. Her four-panel assembly of "Cry Me A River," "Moonlight In Vermont / Smoke Gets In Your Eyes" and "Four on Six" is music that, if painted, would have been created by Manet by way of Delacroix. The four pieces exist as a mini-tone poem of creative whimsy and ingenuity. The "Moonlight In Vermont / Smoke Gets In Your Eyes" diptych exists as the impressionistic fulcrum, lightly balancing these disparate compositions in a musical ether that is both egalitarian and unique. Standards, Old & New adds to what can now be seen as Fox's Virtuoso series of recordings: perfectly accessible, perfectly technical, perfectly listenable.

This Land Is Your Land; 500 Miles High; I Can't Get Started; Have You Met Miss Jones; She's Out Of My Life; She's Leaving Home; Cry Me A River; Moonlight In Vermont / Smoke Gets In Your Eyes; Four On Six; Blowin' In The Wind.