As Getz later said: '(Brookmeyer and I) have the same yearning for fresh, uncluttered, melodic improvisation.' Those last four words sum up 'At The Shrine.' 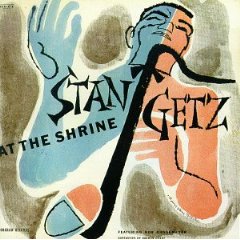 Bookended between The Complete Roost Recordings (Verve, 1950-55) and The Steamer (Verve, 1956), this November 8, 1954 live recording from the Shrine Auditorium in Los Angeles is often overlooked when checklists of tenor saxophonist Stan Getz's early classics are compiled. Originally released over two LPs, it includes in its entirety an outstandingly vibrant 53 minute set by the Getz quintet—in a package tour program also featuring pianist Dave Brubeck and baritone saxophonist Gerry Mulligan's quartets and the Duke Ellington orchestra—plus another 17 minutes recorded the following evening, with drummer Art Mardigan replaced for contractual reasons by Frank Isola. The album was first released on CD in 1992.

1954 had been an eventful year for Getz, for all the wrong reasons. In February he had begun a six month jail term for attempting to hold up a Seattle drugstore for morphine (a gambit so unconvincing that the sales assistant ignored him and continued serving another customer until Getz, embarrassed, ran out of the store). Following his release in mid August, Getz was asked by producer/promoter Norman Granz—who had bankrolled Getz's family during his incarceration—to reform the group which had recorded the Interpretations (Verve, 1953) albums the previous year, and to join the coast-to-coast package tour. The Shrine was the final date on the itinerary.

The tour was headline news and hugely successful. The Shrine performance, which followed back-to-back sellout concerts the same night in Newark, New Jersey and New York's Carnegie Hall, was attended by a capacity crowd of almost 7,000 people (and Led Zeppelin thought they invented stadium gigs?). The vastness of the venue is alluded to in some of Getz's between-song announcements, but otherwise the acoustically warm and intimate recording captures the band much as it might have sounded in a small club.

Those last four words pretty much sum up At The Shrine. Getz and Brookmeyer solo with exquisite, muscular fecundity—as, less frequently, does pianist John Williams—and in their shared theme statements and dual-improvisations attain levels of spontaneous interplay reminiscent of early New Orleans bands, yet on harmonically more complex material. The tunes are straight out of the top drawer, including strong originals by Brookmeyer ("Open Country"), Johnny Mandel ("Pernod") and Al Cohn (the funky "Tasty Pudding," previously recorded by trumpeter Miles Davis), some classy standards (including definitive readings of "Flamingo," "Lover Man" and "Polka Dots And Moonbeams") and two tunes associated with Duke Ellington.

It's Ellington who is heard introducing the Getz quintet at the start of the album, referring to him as "a leading exponent of the cool school." That he certainly was, but as At The Shrine so vividly reminds us, Getz, like alto saxophonist Art Pepper, brought a degree of passionate engagement to his music that isn't stereotypically associated with cool or so-called West Coast jazz. (None of the band members originated from the Coast, and the band itself was formed in New York. Indeed, it might flippantly be observed that the fact that Getz had been busted in Seattle was one of its few qualifications for the label).

"It's so quiet up here you can hear your heartbeat," says Getz at one point. And the audience, who applaud vociferously at the end of each tune, appear to be in a state of enraptured silence through most of performance—as is the listener at home five decades later. Gorgeous, virile, unforgettable stuff.