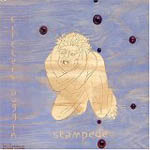 Warning! This isn't jazz. Not according to the rule book anyway. (So if you're reading, Stanley, better hit the back button now.) According to Critters Buggin, Stampede —the first album from the Seattle-based quartet in five years—is a mix of "jazz, dub, funk, punk and electronic junk."

Verily, it is all those things and not forgetting the junk: Stampede sounds like it was recorded in a howling blizzard of the finest uncut Peruvian flake, with a large side order of peyote. Though there is another explanation for that vibe: one of the album's central influences is Miles Davis' music circa '72, which was recorded in a snowstorm and no kidding. So when you hear great canyonesque echoes of "X Rated"—and you will in "Punk Rock Guilt" and to a lesser extent in "Sisa Boto" and "Hojo"—don't worry, it's not another flashback, it's in the groove.

But wherever the chemistry is coming from, and whatever its precise constituent parts, Stampede is upfront and unashamedly out of its tree: sometimes pretty (Mike Dillon's vibraphone is a warm, analog-recorded joy), sometimes fierce (check those "X Rated" keyboards and horns), occasionally even ugly and brutal, and with a Rabelaisian appetite for new sounds and new destinations evident throughout.

Highlights—and practically every track is a highlight—include the edgy, alienated "Persephone Under Mars," featuring the trademark piano "danger motif" from Bernard Herrmann's Hitchcock soundtracks and one of three tracks enriched by the singular string arrangements of Eyvind Kang (on this one sounding like a mutoid Eddie Sauter with a backbeat); the rumbling, slow boiling "Toad Garden," with its majestic saxophone riffs and king crawling cone head guest appearance from Pearl Jam guitarist Stone Gossard; "Punk Rock Guilt," which climaxes with as powerful an evocation of Miles' cocaine-addled '70s brutalism as you are ever likely to hear; and the closing "Open The Door Of Peace," featuring Bachir and Mustapha Attar from the Rif Mountains' trance masters, the Master Musicians of Jajouka, on ghaitas.

In short, it's a trip. And even if less than 20% of Stampede is jazz as defined by the jazz police, anyone with wide open ears should enjoy the flight.