BY DAN BILAWSKY
September 12, 2012
Sign in to view read count 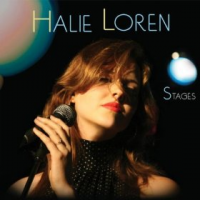 The studio is a safe place for musicians looking to birth an album in a controlled environment, but the stage is the real proving ground for performers. These people make their mark when lights are low, nerves are tested and safety nets are removed. This is where the real deal musicians get separated from the great pretenders and vocalist Halie Loren is as real as they come.

Loren, who may be the best-kept vocal secret in the Pacific Northwest, put out this low-key live album in 2010, but her reach was limited and it went largely unnoticed. Now, with the release of her head-turning Heart First (Justin Time, 2012), Loren's new label is fanning the flames of interest by reissuing this album with a few bonus tracks tacked on for good measure.

Her three-pronged approach to programming, which includes standards, pop pieces co-opted for jazzier purposes and originals, serves her well here. She jumps from U2 ("I Still Haven't Found What I'm Looking For") to Antonio Carlos Jobim ("The Girl From Ipanema") to Hoagy Carmichael ("The Nearness Of You") with apparent ease. She delivers classic material like "Cry Me A River" with polish, unlocks the potential that exists within The Kinks' "Sunny Afternoon" and taps into her inner-Sarah McLachlan on "Free To Be Loved By Me," which proves to be the most memorable original on display. Risky material choices occasionally meet with mixed results, as "High Heel Blues" proves to be a triumph while a tropically-infused take on Pete Seeger's "My Rainbow Race" is a bit too sugary, but Loren's willingness to move beyond the overdone is ever admirable.

Loren occupies the space that exists between pop and jazz, but that dual allegiance hasn't done her any favors in the past. Neither camp seemed willing to stake claim on her, but she deserves to be embraced by both. Now, with this live reissue following on the heels of her strongest studio album to date, this matter will hopefully be rectified.

Danger In Loving You; Sunny Afternoon; I Still Haven't Found What I'm Looking For; More; Cry Me A River; The Girl From Ipanema; Free To Be Loved By Me; Is You Is Or Is You Ain't My Baby; Love Me Like A River Does; They Oughta Write A Song; High Heel Blues; Summertime; My Rainbow Race; I'd Rather Go Blind; Nearness Of You.