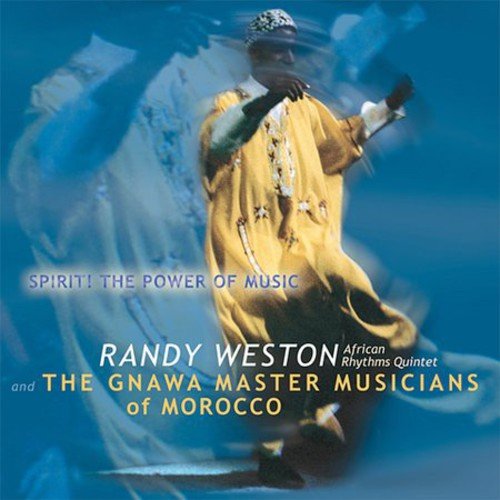 Ever since Ornette Coleman and journalist Robert Palmer ventured to Joujouka in the late 1970s, traditional Moroccan musicians have had sporadic, generally fruitful meetings with American jazzmen. Many of those projects — Coleman’s Dancing In Your Head and Pharoah Sanders’ Trance of the Seven Colors come straight to mind — have leaned heavily towards the traditional instruments, with the jazzmen rather floating above it all. Weston has crafted something closer to his usual brand of Africa-deep jazz and made room for the Gnawas within that context. What he ends up with on this live date is a more Western-accessible form of the Moroccans’ profound spiritual magic.

Weston begins solo, on the low end of the piano, starting to stir up the spirits on “Origin.” After a few minutes Talib Kibwe’s beautiful, sprightly flute emerges for a fervent duet. That is followed by a bluesy round between Weston and Powell’s muted trombone, beckoning the spirits over to the jazzier side of things. Alex Blake’s brilliant percussive bass style, inspired by the rhythms of his native Panama, blends in perfectly with the primitive hag’houge, a North African stringed instrument.

The last four tracks feature vocals by the Gnawas, three each from Marrakech and Tangier. “Chalabati” is redolent of the black church at times, punctuated by handclaps, call-and-response, and low string strums. Clear evidence that the roots of the blues lie firmly withing African soil. Weston’s quintet returns on the first part of “Lalla Mira.” Kibwe’s sinuous soprano weaves in and out of the exciting group chants and layered percussion, rich with the clashes of the karkaba hand- cymbals. The music’s intensity builds to an exhausting level through the remainder of the disc, delivering a wild, cathartic experience to the listener. One of the best world-jazz fusions of recent memory.