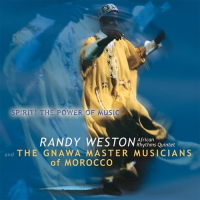 With Randy Weston’s longtime involvement with African music and culture, it seems odd he has recorded so little with traditional African ensembles. While percussion masters like Babatunde Olantunje have augmented his groups, his guest appearance on the Musicians of Morocco’s 1992 Seventh Splendid Master Gnawa marked one of the few times Weston worked with traditional African musicians in context.

The domestic release of Spirit! The Power of Music begins to correct that oversight. Recorded live in 1999 with longtime collaborators Alex Blake, Benny Powell, Talib Kibwe, and Neil Clarke, the African Rhythm Quartet shares the stage with Gnawa Musicians of Marrakech and Tanger. Working in different configurations through the program, the musicians assemble together for the last two tracks, demonstrating vividly what Weston’s music must sound like in his own head.

“Receiving the Spirit” begins with Weston on the bass keys playing solo in the key of reverence, building into awe he reaches up into higher registers and improvises a meditative melody. Kibwe joins him on full-bodied flute, picking up the theme as Randy creates a cathedral of chords for him to blow through. Talib works harmonic minor scales and whirls like an elegant dervish. After Kibwe finishes and receives well deserved applause, Randy resumes his talk with the spirits, composing as he goes. Quietly at first as though entering a church, Benny Powell meshes with Weston, who drops out. Powell blows long deep overtones on the trombone, ending with a bass tone from down where Weston started. “Blessings to all of us,” Randy says over the applause.

Abdellah El Gourd on hag’houge, Alex Blake on bass, and Neil Clarke on hand drums play “An Introduction to Hag’houge and String Bass.” Blake’s remarkable strumming technique blends perfectly with the traditional string instrument known as the hag’houge. Clark’s drumming provides the foundation for the subtle changes that occur in the patterns played by the string instruments. The audience picks up the rhythm and Blake’s changes grow more pronounced.

“Chalabati” features the Gnawa musicians from Tanger and Marraech playing together. Starting with brief ensemble play, a call and response chant creates a song of praise. After a long hypnotic recital the crew goes ecstatic taking the crowd with them.

Weston plays an appreciative and jovial host throughout the performance. With a more deliberate rhythm, the Tangier Gnawa play with greater urgency on “Who Know Them.” The hag’houge keeps to a unison melody with the singers and playfully improvises to ornament the tune. The Marrakech Gnawa perform “El Wali Sidi Mimoun,” as a call and response chant with a crisper pace and busier rhythm than the previous songs. Their intense intricate interplay whips the crowd into frenzy.

By the time “Lalla Mira” starts, the ear’s accustomed to the sound of the Gnawa, and when Weston starts adding occasional chords you know you’re hearing what Weston hears. The horns play an arrangement that gives the overall sound a taste of Fela Kuti. Talib takes off on alto, the higher reed bridging the musics, and with Blake and Clarke joining the Gnawa percussionists, the room feels like it rises off the ground. Powell’s trombone solo adds a soulful flavor, and his quote of “Wading in the Water” could hardly be more appropriate. Randy plays sprightly off the rhythm as the chanting swells. Everything stops for a Clarke solo, then the ensemble resumes with vengence for the finale.

“Lalla Mira Pt. 2” fades in with the rhythm players smoldering. Talib blows gasoline on the fire and Powell pumps up the pace. Weston sounds like Ellington with his unpredictable chords dropping on the band. The piece fades out leaving you wanting more, even after 70 plus minutes of transcendent music.

Receiving the Spirit, Introduction to Hag