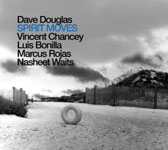 With his post-Milesian quintet now in its eighth year and his electronica-informed Keystone group in its fourth, anyone familiar with trumpeter Dave Douglas knows that it's about time for something different. With a line-up that puts a new twist on an old concept, Spirit Moves is Douglas at his funnest. With nothing but horns and drums, it's a clear nod to the New Orleans brass band tradition, but featuring trumpet, trombone, French Horn and tuba, it possesses its own complexion and style.

With concise charts, compelling soloing and plenty of exhilarating interaction, Spirit Moves is a party album with a difference. There's plenty of groove to be found courtesy of drummer Nasheet Waits, although tubaist Marcus Rojas—back from Douglas' more overtly experimental Mountain Passages (Greenleaf, 2005)—shares equal responsibility in creating music as good for the feet as it is for the head...and the heart. As rich a sound as these four horns create—rarely brash, other than the occasional leap into the stratosphere by Douglas—it's almost always in the context of an engaging rhythm, whether it's the greasy Second Line of "This Love Affair," the visceral funk of "Orujo," the brush-driven balladry of "Twilight of the Dogs," or the up-tempo soul of Otis Redding/Steve Cropper's "Mr. Pitiful," one of two covers on this set of largely original compositions from Douglas.

The inclusion of French Hornist Vincent Chancy creates a softer cushion for Douglas' imaginative charts, whether it's the syncopated lines that start "Orujo" or the lush vertical harmonies of the easygoing "The View from Blue Mountain." The open-ended "Bowie," where form meets freedom head-on for the disc's knottiest chart, is an unequivocal homage to the late trumpeter Lester Bowie's ability to create complex collages that hung together with a wry sense of humor and near-encyclopedic blend of decades-spanning musical ideas. "Rava" is characteristically spare and lyrical, opening with Douglas' lone voice over a tuba pedal tone; a deeply personal tribute to Italian trumpeter Enrico Rava that combines reverence for tradition with more modernistic concerns, where brief dissonances create a complex weave to support Douglas' focused improvisational flight.

Sophisticated harmony is also at the core of "The Brass Ring," the disc's longest tune. It starts as an impressionistic tone poem but gradually picks up steam as Waits creates a staggered pulse that syncs up with the rest of the horns, supporting a blues-drenched but marvelously inside/outside solo from Douglas that's amongst his best of the set. Trombonist Luis Bonilla, a solid anchor of Brass Ecstasy, delivers some fine solos of his own, especially on the vivacious "Great Awakening."

A participant in the 2009 Documentary Channel series Icons Among Us: Jazz in the Present Tense, Douglas has always looked for ways to marry traditional conceits with forward-looking concepts. Spirit Moves is another outstanding and distinctive chapter in his ever-expanding body of work; one that distinguishes itself by being his most flat-out entertaining disc, without sacrificing any of the signature innovations that have earmarked his career since emerging as a leader over 15 years ago.

This Love Affair; Orujo; The View From Blue Mountain; Twilight Of The Dogs; Bowie; Rava; Fats; The Brass Ring; Mister Pitiful; Great Awakening; I'm So Lonesome I Could Cry.