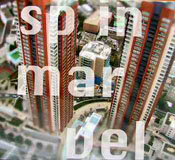 Appearances can be deceptive. Martin France has built a career over the past two decades in largely acoustic environs. Along with being a member of the cooperative ECM group First House from the late 1980s, the British drummer has been involved in over fifty projects, including saxophonist Iain Ballamy's More Jazz (Basho, 2007) and pianist Gwilym Simcock's Perception (Basho, 2007) and John Taylor's Angel of the Presence (Cam Jazz, 2006). While he's the UK's most ubiquitous jazz drummer, none of his past projects can prepare you for this first album as a leader.

Although issued under the group name Spin Marvel, this is clearly France's project. In addition to drums (acoustic and electronic), he contributes keyboards, programming and sequencing. He's also is the primary voice on this electronica/ambient-tinged record. It is a collaborative effort, however, including guitarist John Parricelli, bassist Tim Harries and keyboardist/drummer Terje Evensen—the latter a Norwegian connection that makes considerable sense, since Spin Marvel shares much with Scandinavian groups like Supersilent, Ultralyd and Huntsville. Still, while electronic sounds dominate Spin Marvel's landscape, tracks like "Gwig9 do place more conventional instrumental interplay at the forefront, as Harries and France engage in some fiery interaction.

Still, Spin Marvel is more about color and texture than conventional form, rhythm or melody. France doesn't entirely dispense with the concept of predefined shape, however, though he leans more towards the cinematic. "Nepenthe begins with layered guitar and bass tremolos, with one or both occasionally shifting in pitch. Giving way to gentle electronic percussion loops that stand alone, the guitar and bass ultimately reenter, gradually overtaking the loops. "Black Wing opens with a combination of chordal swells, programmed rhythms and real drums, joined by a bass ostinato and jagged guitar shards. The mix/edit is as crucial as what's being played, with France and Evensen creating a soundscape that, grounded in "real playing, feels strangely surreal—a sensation that pervades the entire disc.

Electronics play a large part in Spin Marvel's aesthetic, but it avoids the harsher abstractions of some its Norwegian cousins. Those looking for conventional form may choose to stay away but that would be a mistake, as the album manages to be strangely compelling, even at its most abstruse. And while it is curiously otherworldly, France's penchant for pulse also keeps it somehow grounded—as do collective improvisations like "Copper Field, where France, Harries and Parricelli come together for some "no time, no changes free play.

While many of Spin Marvel's more extreme Norwegian counterparts are excellent textural conceptualists, they're often weak in the area of traditional musical expertise (Supersilent being a notable exception). While Spin Marvel shares much with these groups, and even though it's not always in your face, the fact that France, Parricelli and Harries are accomplished musicians in other contexts makes Spin Marvel an album that, despite its vividly visual mindset, is an unmistakably musical spin on this emergent blend of contemporary form-meets-freedom.