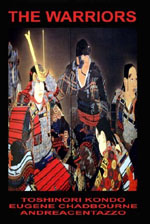 The title of this one's misleading, as this is music made by unconditional collaborationists as opposed to anyone of a more aggressive disposition. The results of their collaboration embodies that old saying about the meeting of minds, and the results are the outcome of a highly refined group sensibility that was evidently defined by the trio's experience as a working group.

With the exception of "The Warriors #8," no individual track breaches the ten minute mark, and in a sense that situation lends the music an air of immediacy that might not otherwise have been the case. The one minute and fifty six seconds of "The Warriors #3, for example, is made up from small sounds seemingly teetering on the brink of hyperactivity, only for the whole to be curtailed in disorienting fashion.

The issue of deployment is, perhaps, one of the most important. Toshinori Kondo's trumpet playing is highly personal and acutely responsive on "The Warriors #4," at the same time as it seemingly has little in common even with the work of, say, Wadada Leo Smith. More significantly still, he doesn't assume the role of anything as hackneyed as a lead voice.

On the issue of responsiveness, the same can be said for Andrea Centazzo's percussion work, the precedents for which would appear to be oblique at best. It's clear however that he might have influenced the work of a musician like Gino Robair in his acute sensitivity to color and nuance, as is evident on "The Warriors #5.

Eugene Chadbourne's free aesthetic is obvious here even though this music was captured over thirty years ago. In the intervening period it's clear that he's refined it in the way of the true artist, whilst at the time he was already clearly deeply committed to the possibilities free playing had to offer. To hear him on "The Warriors #7 is to hear the work of a musician in thrall to no mentor, not even the arguably overriding figure of Derek Bailey in terms of the guitar's role in music fashioned so immediately in the moment. Suffice to say that the adage concerning the sound of surprise applies here in abundance.

The same is true of the transitory nature of so much music. In that respect, at least, this disc denies the air where so much of it ends up and those with the ears can accordingly reap the rewards.