By PATRICK BURNETTE
June 7, 2019
Sign in to view read count 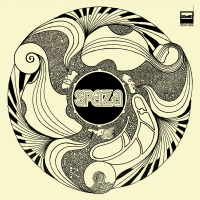 SPAZA, the debut from an improvisational collective based in Johannesburg, South Africa, may be the most surprising and gratifying album you hear this year by a group you've never heard of before. (The collective itself happens to be named—you guessed it—SPAZA.) The press materials note that the music was "completely improvised" and that SPAZA is part of the "experimental music" scene, which might lead you to expect a free-jazz blowout, but the tone is mellow overall and the improvisations harmonically grounded. SPAZA is no blowing session; it's more like a trip, but not in a hippy-dippy way. The album boasts an organic unity that never feels contrived or confining and provides the musicians room to stretch without ever tipping into self-indulgence.

Bass and percussion are the bedrock here, but vocals—often heavily treated—provide the predominant textures and body. Some sections of these morphing, flowering performances are sung in English (phrases float up out of "Ice Squinchies / Waiting for You" and "Sunlight, Glycerine, 2 loose draws") but other songs offer call and response chants in other languages ("Invocations (interlude)"). In the closing number, "Stametta Spuit— Invocations," the vocals are so heavily treated they sound like a cross between crickets and Smurfs, and yet are somehow entirely appropriate. It is one of SPAZA's many triumphs that the electronic manipulations, no matter how extreme, never seem arbitrary or artificial. The "fx" on this record are wielded by artists who know exactly what effects they are striving for. The singing, no matter how filtered, echoplexed or manipulated, is delightful.

There are improvisational forays by trombone and violin as well as voices, but long linear statements are not the point of the recording—the focus is on interweaving various strands rather than showcasing individual virtuosos. Throughout, there is a sense of logical progression from one idea to its next elaboration and/or transformation that makes the record hang together like the best concept albums from the seventies, while not sounding particularly like any of them. The most recognizable musical gestures, for those of a certain age, might be the distorted guitar washes from "Magwinya, Mangola neWhite Liver," which evoke Adrian Belew's work with Talking Heads on Remain in Light (Sire Records, 1980). And there is a distant kinship here with the "astral jazz" of Lonnie Liston Smith, which has been recycled recently to great fanfare and profit by Kamasi Washington. The music on SPAZA is more challenging than those reference points, but it also succeeds in conjuring the atmosphere of transcendence that Washington, especially, seems stuck in mud trying to evoke.

This is going to be a difficult album to market. Most of us outside of South Africa don't know that "spaza" refers to informal neighborhood stores in that country. The featured musicians are not household names. Even the cover art, attractive as it is, yields no secrets about the content. But the music deserves a wide and attentive listenership. Next time you are tempted to put on Kamasi Washington's The Epic, listen to this forty-minute excursion instead—two or three times. You'll be grateful you did, and still have time left over for a nice dinner.