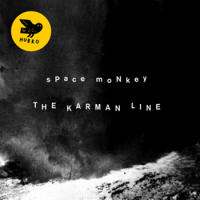 According to Wikipedia, the Kármán Line ..."lies at an altitude of 100 kilometres (62 mi) above the Earth's sea level, and commonly represents the boundary between the Earth's atmosphere and outer space." It's as good a name as any for the debut album from sPacemoNkey, a collaboration by two of Norway's most impressive and increasingly influential musicians, despite still being in their early-to-mid thirties: keyboardist Morten Qvenild and drummer Gard Nilssen. Largely the result of spontaneous composition, with just three of its nine tracks being preconceived by Qvenild, sPacemoNkey's music is both as grounded as the world and as ethereal as outer space: music that challenges preconceptions of sound, melody, harmony and rhythm, but also music that remains strangely accessible, ranging from majestic and beautiful to chaotic and cacophonous.

Qvenild—when he's not singer Susanna Wallumrod's Magical Orchestra, both a band member and duo partner for vocalist Solveig Slettahjell, or performing with the collaborative In The Country, which has, since its 2005 debut with the enticingly titled This Was the Pace of My Heartbeat (Rune Grammofon), become one of Norway's most popular trios— has been honing an electro-acoustic concept called "hyper piano" for the last few years. This extension of an acoustic grand piano into something possessing broader textural capabilities has been heard in performance with In the Country at festivals including this year's Mai Jazz festival in Stavanger, Norway, but sPacemoNkey may be the first place where Qvenild's hyper piano assumes real prominence...though it's not necessarily easy to discern without careful listening because Nilssen also employs electronics to augment his percussion array.

Nilssen may well be, at least in this moment, Norway's busiest drummer, playing in groups as diverse as the incendiary post-bop Obara International Quartet that blew the roof off Plassen's Teatret Vårt Natt at the 2013 Molde Jazz Festival and took things even further at the Don't Worry! We're From Poland showcase, part of the 2013 Jazztopad Festival in Wrocław, Poland; the guitar power trio Bushman's Revenge, which tore its own strips off the walls of Plassen's larger Teatret Vårt Konsert at Molde 2013; and the more avant-leaning Cortex. Here, however, he's a tremendously simpatico partner for Qvenild, the duo working its way through a 45-minute recording that feels more like a unified journey than a discrete collection of compositions and improvisations.

Order is everything, as the duo begins with "Aeronautics," a spontaneous creation that feels, in Qvenild's somber mood and Nilssen's spare, gently backbeat- driven pulse, like something In the Country might do; but it's a deceptive piece where, with piano and drums in the front of the mix, all kinds of electronics- generated colours float in the atmosphere around them. In episodic fashion, Qvenild and Nilssen proceed to turn the seven-minute opening track upside down, moving into more eclectic territory, with the pianist (still, however, spare) turning more jagged and angular as he introduces fuzzy, overdriven electronics and sounds resembling the turning of a dial on an old shortwave radio, while Nilssen begins to process his own playing—but not for long, as the duo resorts to far more aggression still, the drummer's reckless fluidity both a dovetail and alternating partner to the pianist's similarly extreme sonic explorations.

And that's just the first track. Qvenild's "Chopping Wood in My Brand New Moon Boots" feels, paradoxically, less structured...at least, for the first three minutes, until the pianist suddenly turns to a series of scripted changes that end the track on a quietly majestic note. "Digital Cigarettes" is a fiery free-for-all, with booth players—but especially Nilssen—at their most unfettered, with former Jaga Jazzist producer Jørgen Træen}} adding some modular synth to the mix, while the aptly titled "Darkness" may begin with sounds that somehow evoke the vast emptiness of an outer space where there is no sound...all the more curiously so for the sparsely populated, low-register dissonances that Qvenild then applies to its final forty seconds.

Space, color, texture and devotion to pulling form form the ether—even when that form sometimes seems anarchistic and reckless—The Karman Line is an auspicious debut that draws from past precedents, in particular the improvisational wizardry of fellow Norwegian group Supersilent. But with Qvenild's hyper piano and Nilssen's astute textural counterpoint, it's already a duo with its own personality. A consequence of Norway's very specific ability to organically meld electronics with acoustic instrumentation—less effect and more extension—it's also a debut that begs for a follow- up...and the opportunity to experience the clearly in synch sPacemoNkey in performance.