BY DAN MCCLENAGHAN
November 12, 2004
Sign in to view read count 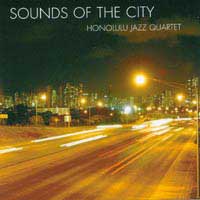 Figure in all the innumerable ensemble configurations possible in jazz, and a soft spot still clings to my heart for the well-rendered quartet outing, saxophone and a rhythm section playing straightforward mainstream jazz. The Honolulu Jazz Quartet's Sounds of the City delivers just that.

Bassist John Kolivas leads the guartet, which has been together since 2001, developing a remarkable musical collectivity, an ensemble sound that, even when someone solos, it doesn't stand apart as a solo but fits into the music as a logical transition in the flow of sound. Kolivas anchors this sound with a big warm tone behind an infectious group empathy suffused with positive vibes (the Aloha Spirit perhaps), full of bright melodies that seem always to be telling a story. Then there's the musicianship—first rate all around.

Saxophonist Tim Tsukiyama's tenor blows in the round and airy side of the spectrum on "Remembrance," and on the dry and slightly scratchy side, in front of Kolivas' loping bass, on "Woody's Blues," where he brings Dexter Gordon's work on those early (late '40s) Savoy recordings to mind. He is equally adept on soprano—"Cozumel Blues," "Hibiscus Drive"—with a tangy/sweet tone.

Stories told: "Heater's On" is a tribute Kolivas penned to a cranky and complaining New York City apartment heater when he lived in the Big Apple in the early eighties. The tune features drummer Adam Baron's percussion mimicking the metallic clunks and grumbles of the noisy appliance. "Ole Buddy," written by Kolivas for former Honolulu bassist Buddy Burke, has pianist Dan Del Negro plinkng, Basie-like, concise little notes representing Burke's habit of raising and lowering his eyebrows while he played; and "Mt. Fuji"—a full speed ahead tune—was inspired by the sight of the majestic Japanese peak from the window of a speeding train.

When you think of Honolulu, jazz probably doesn't come to mind. It didn't for me. Now it does. Sounds of the City is an inspired set by an inspiring group. In that sax and a rhythm section category, this is the finest I've heard this year.

Visit the Honolulu Jazz Quartet on the web at www.honolulujazzquartet.com .