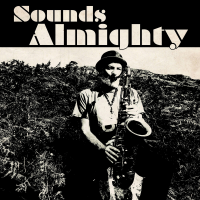 The British tenor saxophonist Nat Birchall has been recording uplifting cosmic-jazz since 1999, when he self-released his debut album, The Sixth Sense, a hard-bop tinged affair which included, in tracks such as the two versions of "Helix Nebula," pointers to his future direction. It took Birchall a decade to come to wider attention, with the release of the early masterpiece Akhenaten on his occasional collaborator, trumpeter Matthew Halsall's Gondwana label in 2009. Since then Birchall has released another seven outstanding albums, including early 2018's Cosmic Language (Jazzman).

In summer 2018, Birchall has surfaced again with another disc, on another trajectory. Sounds Almighty is a celebration of belle-epoque instrumental reggae and dub. Birchall reveals himself to be a master of the genre, with an approach which evokes such founding fathers as Jamaican horn players Tommy McCook, Cedric Im Brooks and Roland 'Ringo' Alphonso. Birchall's first musical passion was reggae and the love abides.

Well, anyone who read Birchall's 2010 interview with AllAboutJazz, for starters. Plus the sound-system devotees on Birchall's northern English hometurf for whom he has been DJing deep-roots sessions for as long as he has been playing cosmic jazz. "In the mid 1970s I was into reggae and dub to the exclusion of anything else," Birchall told AAJ. "I would go to Liverpool, to a specialist reggae shop in the Toxteth area, to buy tunes. I would spend all my money on these records, and the people in the village would be like, 'What the hell is that? You're weird!' Coming from the northern countryside I didn't meet too many black people until I was in my late teens, so I was a man alone in the music I was listening to.... Reggae got me into playing jazz. I knew that all the Jamaican horn players I loved were jazz players and their music was influenced by John Coltrane." Birchall started to buy jazz records and bought his first saxophone and the rest as they say...

Sounds Almighty is a collaboration with Manchester-based dub producer Al Breadwinner, who co-produced the album with Birchall. The star guest is veteran Jamaican trombonist Vin Gordon aka Don Drummond Jr. A member of the jazz-based studio band the Skatalites from 1964, Gordon took over as first trombonist after the revered Don Drummond was incarcerated in Kingston's Bellevue Asylum the following year. Gordon has since graced the records of practically every first-generation reggae artist you could name. Getting him to join the band for Sounds Almighty is both a coup and an indication of Gordon's regard for Birchall's playing.

The album is "respectfully livicated to the great Jamaican artists who originated this music"—and it does their creation proud.