By Glenn Astarita
January 1, 2002
Sign in to view read count 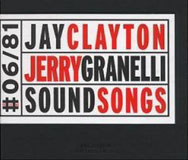 From 1985 thru 1995, JMT Productions' modern jazz-based record label released recordings by up and comers such as saxophonists, Steve Coleman, Tim Berne, Greg Osby and drummer, Joey Baron, amid a stellar cast of forward thinking artists. However, "Polydor K.K purchased the catalogue in 1995. Thus, all activities ceased as many of these albums and/or CDs were relegated to either pricey import status, or deemed unattainable as the existing inventory diminished. Now, Winter & Winter are remastering these reissues in 24-bit digital format to coincide with the label's modish, textured cardboard packaging, intriguing artwork, and superior audio engineering. With these re-releases, the folks at W & W have inserted the original album/CD cover art into a sleeve while standardizing the new cover art with black and white framing and red font.

Recorded in 1985, Sound Songs features the somewhat unorthodox pairing of drums (Jerry Granelli) and vocals (Jay Clayton). Here, the estimable musicians embark upon an exploratory mission as they intertwine elements of the avant-garde with mainstream-like motifs. The duo executes a fanciful spin on Charles Mingus' classic, "Goodbye Porkpie Hat, thanks to Clayton's velvety or at times, hallowed vocalise and Granelli's hybrid swing/polyrhythmic patterns. On "Joyous March, the drummer launches a military style progression to coincide with Clayton's wordless vocals, as the musicians pronounce an existential vibe in concert with an altogether festive approach.

The twosome render introspective musings on pieces such as "I'm Nobody, where Clayton mingles narratives, scat vocals and emotive themes atop Granelli's rolling tom-tom movements. Hence, Granelli does quite a bit more than simply maintaining a pulse as the duo frequently engages in vibrant exchanges and sonorous propositions throughout. Sound Songs looms as an interesting and somewhat daring statement.

Recorded in 1985, Point of View signifies the debut recording by vocalist, Cassandra Wilson. Needless to state, Wilson has subsequently enjoyed a successful career. Conversely, at this point in time, we find the vocalist incorporating some of saxophonist, Steve Coleman and affiliates, funk-rock back-beats and bouncy swing methodologies.

Wilson's warm, misty-toned vocalizing also serves as an additional instrument in concert with trombonist, Grachan Moncur III, saxophonist, Steve Coleman, and guitarist, Jean-Paul Bourelly's copious soloing opportunities. During "Square Roots and Miles Davis' "Blue In Green, Wilson harmonizes with the horns while exhibiting her scat-vocal expertise in concert with mid-tempo swing vamps and the instrumentalists strong soloing. "Desperate Moves features electric bassist, Lonnie Plaxico's pumping lines, and Bourelly's Hendrixian chord voicings, while Wilson tops off the sprightly proceedings with memorably melodic and exuberantly stated choruses. Moreover, the band surges forward with a bluesy straight-four motif on "I Thought You Knew. Point Of View is a beautifully recorded production and provides a hearty glimpse of the vocalist's rite of passage into the world of jazz music.

Point Of View: Square Roots; Blue In Green; Never; Desperate Move; Love And Hate; I Am Waiting ; I Wished On The Moon; I Thought You Knew.