By Dan McClenaghan
September 10, 2006
Sign in to view read count 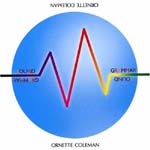 In the beginning of free jazz, there was Ornette Coleman. Actually, the alto saxophonist was the beginning of free jazz. His 1959 Atlantic recording The Shape of Jazz to Come followed on the heels of a couple of innovative smaller label outings that didn't make a splash at the time. Many musicians have followed Coleman down the path of freedom, but none have equaled him.

Sound Grammar is his first CD release in ten years. His last studio efforts, the simultaneously released Sound Museum and Four Women (Verve, '96), featuring overlapping tracks, were, to my ears, the high points of an already legendary career. He's surpassed even those stellar outings with this release.

Over a nearly forty-year career, Coleman has recorded with various configurations, from duos all the way to symphony orchestras. Sound Grammar, a live set recorded in Germany in October 2005, features a quartet with his son Denardo on drums and two bassists—Gregory Cohen (picking); and Tony Falanga (bowing). The two-bass dynamic creates a texture that feels viscous and frictional at the same time, a perfect backdrop for the saxophonist's piercingly resonant tone, which finds the "sound of expressed reality."

On listening to past recordings, Sound Grammar comes closest in tone to Coleman's two masterful volumes of At the "Golden Circle" Stockholm. Those 1966 Blue Note trio recordings were also live dates, placing the leader alongside drummer Charles Moffett and bassist David Izenzon. The "Golden Circle" sound glowed with the rare energy and electricity of an artist in full swing, a true American original, unfettered by expectations or outside influences. Remarkably, Sound Grammar surpasses those youthful efforts. The intensity level of his earlier work is undiminished on Sound Grammar; the band is "as one," and Ornette blows with a transcendent luminescent soulfullness.

The disc features six vibrant new tunes, along with interpretations of "Song X" (from his 1985 album of the same name with Pat Metheny); and "Turnaround" (from the classic 1959 album Tomorrow is the Question).

Hit the play button. Ornette wails. It's an unmistakable sound: every human joy and heartache—and every emotion in between—blowing out of an alto saxophone.